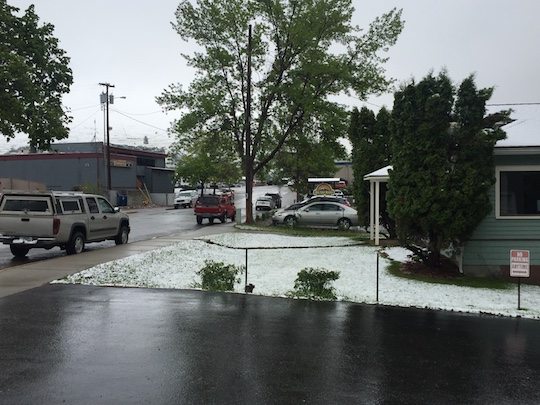 The view form the north

I am snowed under around here, figuratively and damn near literally. While Combat! blog slept off an inordinate quantity of work last night, Missoula got a couple inches of snow. It was 85 this time last week. For the second year in a row, my lilac bush has taken a brutal beating, and dazzling mountain springtime has lapsed back into drear. Every year, I learn the same hard lesson—don’t trust spring—and every year I forget. Speaking of lessons repeatedly unlearned, President Trump put out another scandal yesterday. Perhaps you heard that he tried to get James Comey to call off the investigation of Michael Flynn. That’s obstruction, right? This one has to be the one that brings him down. Yet part of me thinks it won’t matter. Maybe it’s just the pervasive sense of unreality that the Trump presidency has generated, but I have become scandal fatigued. I have a hard time believing that anything can derail the Trump train before it pulls us all over the edge of a cliff.1 Either way, though, we’re watching history. This is either the unfolding of a Watergate-style meltdown or the beginning of the era when literally nothing that happens matters to American democracy. We live in interesting times.