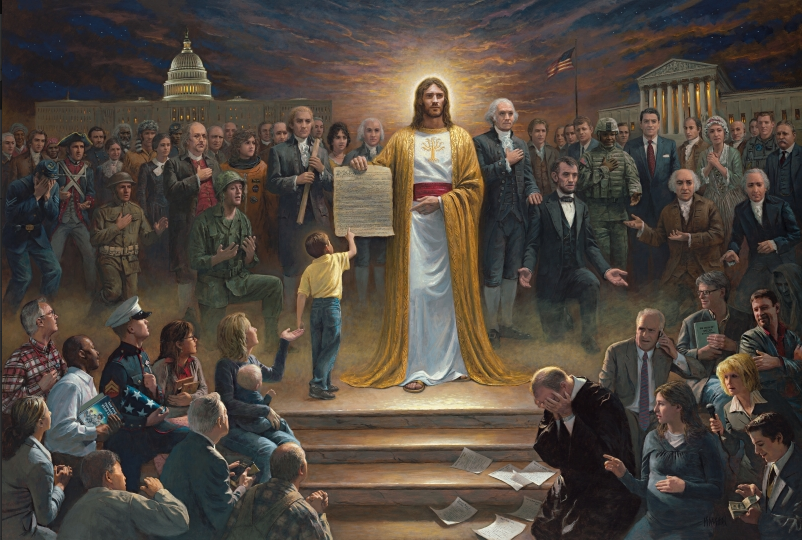 Click on the image above to view this beautiful masterwork in its original, popup-captioned form. Those three smug dudes in a cluster on the right side? Mr. Hollywood, a college professor, and Satan. Only one of them has anything positive to say about your screenplay.

Spooky oil paintings you can buy over the internet aren’t the only place where Jesus holds up the Constitution. He also upholds it in real life, despite the relentless attacks of humanists, liberal woman reporters trying to interview the backs of pregnant ladies’ heads (bottom right-hand corner) and the Supreme Court. Sometimes,*

though, Jesus needs a little help. Fortunately, the good people at Conservapedia (“The Trustworthy Encylocpedia”) have undertaken a re-translation of the Bible that corrects the pervasive liberal bias of modern versions. Seriously, their stated goal is to make a new, more conservative Bible. I’m going to say this once instead of including it at the end of every paragraph of today’s post: I am not [fudging] with you.

The Bible may be the literal word of God, but that doesn’t mean it retains its pure form when it’s translated from the original Godanese. As the Conservative Bible Project points out, “Liberal bias has become the single biggest distortion in modern Bible translations…Large reductions in this error can be attained simply by retranslating the [King James Version] into modern English.” As any terrifyingly confident Sunday schoolchild will tell you, the Bible was originally written in Hebrew and Greek,* then translated into Latin, then re-translated from the original with reference to the Latin

to create the King James. Obviously a lot of errors crept in during that process, like when you play “telephone” and you whisper “be nice to people and don’t steal stuff” in the ear of the person next to you, and by the time it gets to the end of the line it’s “Let not a man lie with another man as with a woman, nor with the beasts of the field, for that is abomination.” The Conservative Bible Project’s solution to this problem is to translate it again, using the umpteenth-generation KJV as the root text and “using powerful new conservative terms as they develop.”

Obviously, this is a hilariously bad idea—and one that, if the already Cromwellian tone of the CBP’s Talk Page is any indication, will probably end with people chopping off each other’s hands. It’s also a veritable gold mine of insights into the conservative approach to Christianity, and the degree to which the right has made the Bible more of a cudgel than a shepherd’s crook. Consider the CBP’s crusade to excise John 7:53-8:11—the story of the adulteress, which ends in the famous admonition “let he who is without sin cast the first stone.” Nearly all contributors to the CBP agree that the verses are an example of liberal bias, encouraging permissiveness, undermining the death penalty, and otherwise seducing us away from the America Christ imagined in the year 28. They feel the same way about Luke 23:34—”Father, forgive them, for they know not what they do”—and just about any other passage in the New Testament implying that forgiving others is an important aspect of Christianity. The conservative Bible will focus on Jesus’ real core message: laissez-faire economics. Their new translation will “express Free Market Parables; explaining the numerous economic parables with their full free-market meaning [sic.]” In case you still have food left in your stomach, they’re also worried about possible translations of the word “peace,” which in liberal hands has strayed toward “the absence of war,” from its original meaning, “fullness and tranquility of mind.” You know, like the way you feel right before you execute an adulteress.

On the whole, the Jesus of the CBP wants us to spend a lot more time kicking ass and accumulating capital, and a lot less time “improperly encouraging the ‘social justice’ movement among Christians.” It’s a re-envisioning of the man from Nazareth naked in its disdain for the meek, the poor in spirit, and the peacemakers. If that shocks you, it’s probably because you’re looking at Christianity from the outside. The notion of Jesus as a proponent of forgiveness and charity is to contemporary evangelism as “Lola” is to The Kinks. True fans—the guys who listen to the old albums—know that R. Davies was a mod and J. Christ brought not peace but a sword. For them, contemporary Christianity is a philosophy of personal empowerment—one that gives you a personal line to the Awesome God that AIDS cases, single mothers and the unemployed don’t have.

The hubris of that philosophy is laughable, of course, but we’re laughing at it for the wrong reason. Even the critics of the Conservative Bible Project—and there are a lot of them, on all sides—don’t acknowledge the horse at the table: this isn’t the first Bible written to serve political ends. That would be, um, the first Bible. To pretend that the free-market Jesus who wants you to smash Monica Lewinsky’s face with a chunk of granite is any more a human construction than the Jesus of popular imagination is to ignore historical fact. We’re not talking about a questionable biography of Charlie Chaplin, here. The Conservative Bible Project is a reimagining of a fictional character—a character based on a man who probably really existed somewhere in the Roman empire two thousand years ago, but a character nonetheless. To laugh at the notion that he hates cap-and-trade and then nod solemnly at the contention that he was the son of god and couldn’t be killed by conventional weapons is an act of bad faith. Call it respect for belief if you want to, but all you’re really doing is picking the very popular set of arbitrary claims over the very recent one.

The Conservative Bible Project shows how much respect for belief some very committed Christians apply to their own religion. It’s Christianity as a shield, with a particularly heartless species of American conservatism plodding along behind it. The only thing that separates it from the Christianity of Sarah Palin and Mike Huckabee is that no one takes it very seriously. We should mock it, not just because it is stupid and poorly argued but because it is a tool, intended to help install a stupid and poorly argued United States government. It is not, however, the only tool employed for that purpose. That it is dull and clumsy is merely a difference in craftsmanship, not kind.