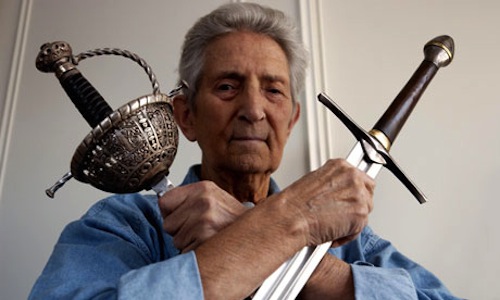 Combat! blog is taking a personal day today, which is a good time to think about capital-l Life—known more popularly as death. Today’s New York Times ran the succinctly compelling headline Bob Anderson, Sword Master, Dies at 89, and sure enough, there is the life of an eventually-elderly badass you’ve never heard of but have, in fact, seen. Anderson played Darth Vader in the light saber combat scenes of The Empire Strikes Back and Return of the Jedi, which makes him a part of my recollected childhood arguably more vivid than the third grade. He was also an inter-service fencing champion for the Royal Marines in the 1940s. Go ahead—picture the man above as a 22 year-old in basic training, whacking at another 22 year-old with an épée and wondering whether the Red Chinese will invade Korea. Then picture him in 1981 as someone explains to him what the fuck a Star War is. Now picture him lying in bed thirty years later. The scope is impossible, widening the picture until the man in the middle becomes a technical problem of scale. I heard about this man by reading the newspaper the day after he died. Possibly, several years from now, I will not be able to remember his name. The question of what it all meant surrounds any person’s death in a way that suggests the very origin of meaning. In this case, analogous like the other cases, it is perhaps best to say that Bob Anderson loved fighting with swords.