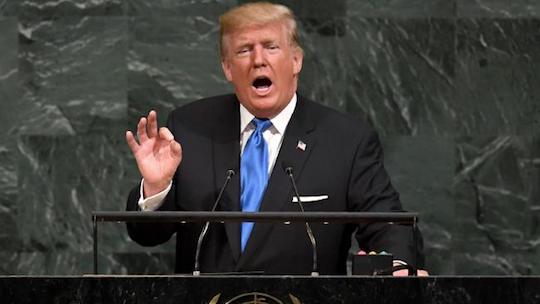 There’s something about the green marble background at the UN General Assembly that really puts Trump in his element. Normally it looks dated, like Astoria’s idea of opulence in the 1990s, but put an icon of self-aggrandizing greed in front of it and the whole thing comes together. It makes me want to get out my gold fork and knife and dig in to a copy of The Andromeda Strain. Anyway, decor is the only way Trump is in his element at the United Nations. He makes a jarring contrast with most other aspects of that organization, for example their commitment to world peace. This morning, he took advantage of his audience of world leaders to threaten North Korea, like so:

For those of you who can’t watch videos because you’re prisoners or something, here’s the fillet:

The United States has great strength and patience, but if it is forced to defend itself or its allies, we will have no choice but to totally destroy North Korea. Rocket Man is on a suicide mission for himself and for his regime. The United States is ready, willing and able, but hopefully, this will not be necessary. That’s what the United Nations is all about. That’s what the United Nations is for. Let’s see how they do.

The United Nations is the greatest force for peace in the world, and I call on it to fulfill its mission by restraining my murderous impulses. Let’s see how they do. These remarks call attention to another element of the Trump aesthetic that is totally out of place at the UN: mean nicknames. In addition to raising questions about how he understands the Elton John Song, referring to Kim Jong Un as “Rocket Man” seems very out of place here.

Mean nicknames made a kind of sense during the campaign, which explicitly set candidates at odds with one another. Trump’s basic promise was that he would bully politicians on behalf of ordinary people, so his insult-comic persona was likable, albeit from a limited perspective that I did not share. It makes no sense before a body whose object is international cooperation, though. I suspect that the UN would cause more problems than it solved if all the delegates called one another names. It’s hard to claim you want peace with North Korea when you antagonize its notoriously vain dictator and then threaten to “totally destroy” his country. But it’s not Trump’s job to prevent the war that two generations of his predecessors have successfully avoided. That’s up to the UN. Let’s see how they do. 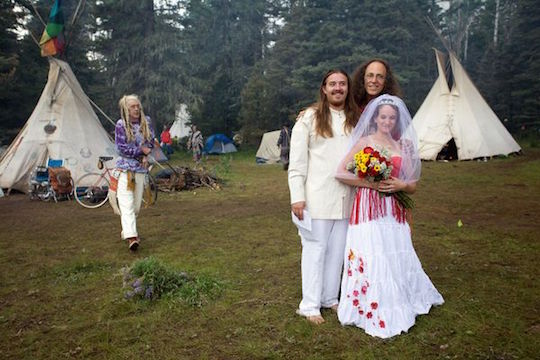 Dangerous extremists at the Rainbow Gathering

Those of you who have not yet assumed internships in the Combat! office might not know my deadline schedule. My practice as a writer is governed by strict adherence to the aesthetic principle of whatever anyone will pay me to do, so my week is planned in advance. For example, I submit my weekly Indy column on Monday for Thursday publication. This Monday, I wrote about the Missoula Police Department’s application for a grant from the Department of Homeland Security, in which they cited the Rainbow Gathering as an “extremist hazard.” Yesterday evening, the Missoulian announced that MPD had withdrawn its application and apologized to the Rainbow Family. The Rainbow Family accepted the police’s apology, offered them a joint and was arrested immediately.