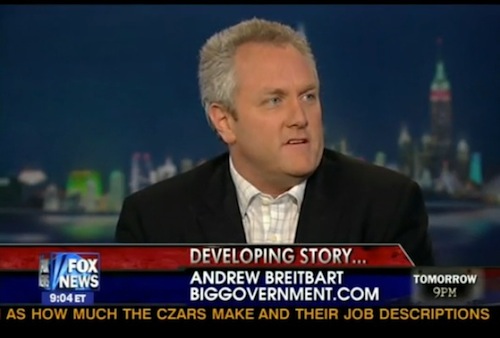 Andrew Breitbart, whose picture is _much_ easier to find on the internet than Conor Friedersdorf's—I'm just saying.

Marshall McLuhan once defined “news” as events that we know about even though they don’t directly affect us. His construction highlights an important aspect of the form: because you learn about news from reports and not from observed phenomena, the credibility of the reporter becomes paramount. Basically, unreliable reporter is to news as schizo-affective disorder is to lived experience. It so happens that the growth of the internet combines vastly more news outlets with vastly reduced reliability, so that getting your news from the web is the equivalent of either having a crystal ball the lets you see into every corner of the world or of staring into your aquarium and believing it is a crystal ball that et cetera etc. You just don’t know. Thus is internet news particularly at the mercy of its reporters’ ethics, and by extension particularly vulnerable to insane, slanderous conspiracy theories. Just ask Atlantic reporter Conor Friedersdorf.