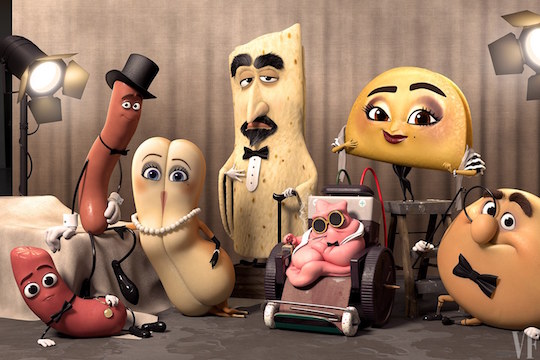 The problem with going on hiatus is that you invariably miss the year’s most important events, e.g. controversies over racial/sexual overtones in talking food. Probably, you already heard that Sausage Party has been added to the long list of Seth Rogen movies we agree to remember as funny. The film garnered mostly positive reviews, including one from Autostraddle written by a freelancer and subsequently unpublished. The site took down that review and ran a lengthy retraction/apology last week. It reads, in part:

They are not kidding.

END_OF_DOCUMENT_TOKEN_TO_BE_REPLACED 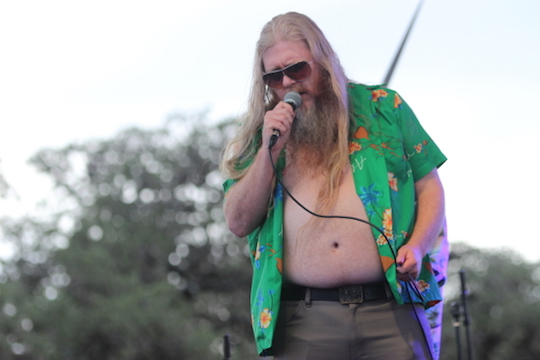 Last week, the Federal Election Commission announced that Ben Carson had raised more money from individual donors in Montana than any other candidate. Like Montanans themselves, his donors cluster around Billings and Kalispell, but they are also more widely distributed than donors to any other candidate. They live in the boonies. This supports the hypothesis I developed during my independent research in Iowa, where I found that Carson had the support of 100% of voters on my great aunt and uncle’s hog farm. He is the candidate of good country people.

That he is not the candidate of the GOP tells us something about the changing dynamics of Republican politics. Carson is not the different from the two other men leading his field. Like Trump, he has no previous experience in government. Like Cruz, he made a name for himself as an outspoken—some might say obstreperous—critic of President Obama. But unlike Trump and Cruz, Carson is meek. His meekness is a quality that good country people hold dear, but in the 2016 Republican nominating contest, talking loud and crazy is a feature, not a bug. You can read all about in this week’s column for the Missoula Independent.

But that’s not all the Indy has to offer. Valentine’s Day is this weekend, and that means it’s time for the annual Love and Sex issue, featuring essays on subjects from strip clubs to the slow fade, Valentine’s for ironists and the charm of first dates. That last one is by me. You can read ’em all here, and I recommend that you do. There’s Jamie Rogers in there, and he is always good.

Meanwhile, Benji Hughes is getting better. If you’ve been foolish enough to let me control your stereo, you’ve probably heard The Mummy, a strange and pleasing song from his 2008 debut. That sprawling double album is fun, but it felt more like a series of ideas for songs rather than a developed work. Eight years later, Hughes has released his second album, Songs in the Key of Animals, and it’s great. It’s got the same 1970s modal sound, but the songs are more fully formed and, as the album progresses, heartfelt. That’s a positive development for a talented artist who has verged on novelty music before. You can read my review here. I consider this track the single:

You’ll find that sweet jam on my Winter 2 mix, which I have recorded as a single, continuous track and uploaded to SoundCloud, because CD drives are a vanishing species. I didn’t think I did much this week, but I guess I’ve been pretty busy. We’ll be back tomorrow with Friday links! 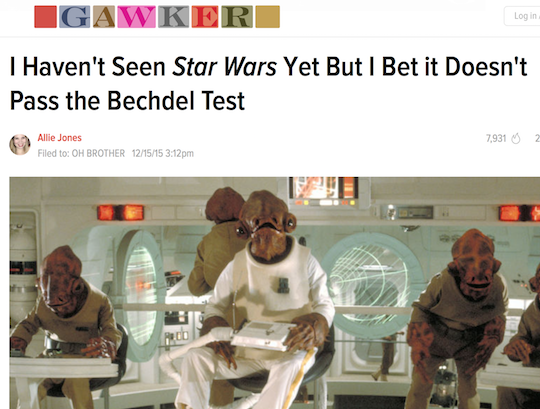 The Gawker article in question

Yesterday, Gawker published this article titled I Haven’t Seen Star Wars Yet But I Bet it Doesn’t Pass the Bechdel Test. Presumably, it was not sincere. It seems to be a response to reports that Star Wars: The Force Awakens passes the Bechdel Test, a standard of gender representation in film that demands two named female characters talk to each other about something other than a man. Gawker contributor Allie Jones argues that although she has not seen The Force Awakens—or any Star Wars movie, for that matter—it is extremely unlikely that the new sequel is Bechdel-compliant. Quote:

Think about it for one second: A Star Wars movie that passes the Bechdel test? Uhh, sure. Not.

I haven’t seen this new movie yet, nor have I seen any of the other Star Wars movies. I’m still pretty confident that there is no Star Wars scene in which two women talk about something other than a man or a male robot or whatever.

I’m going to say she is putting us on. Contradicting the account of people who saw the new Star Wars movie on her authority as a person who has seen no Star Wars movies seems too egregious to be sincere. What we have here is some form of irony, but is it satire? Or what?

END_OF_DOCUMENT_TOKEN_TO_BE_REPLACED

If you like totalizing theories of economics the way I do—which is to say, if you like reading descriptions of those theories—you have probably heard about Thomas Piketty and Capital In the 21st Century. The English translation of the 700-page book has been well-received since its publication last month, and Piketty has been interviewed in just about every outlet imaginable, including the New York Times. That one is worth reading, if for no other reason than for his observation that the income distribution that characterized the late 19th and early 20th centuries, when “the top 10 percent of the distribution was full of rental income, dividend income, interest income,” is coming back.

END_OF_DOCUMENT_TOKEN_TO_BE_REPLACED 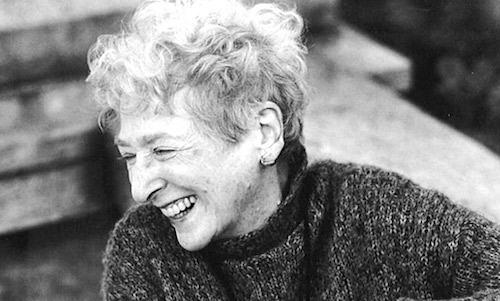 Lore Segal in the world’s most likable author photo

Since my dear mother gave it to me for Christmas yesterday, I have read 92% of Half the Kingdom, Lore Segal’s new novel about an emergency room that gives senior citizens Alzheimer’s. Half the Kingdom is a literary comedy, in that it is about small but deeply felt moments between quirky, real-ish people rather than the other two things books can be about: multiple generations of an immigrant family or child wizards. Obviously, I like Half the Kingdom, because I read so much of it in a relatively short time. But there is also a problem with it, which I feel the following sentence encapsulates:

If you find, reader, that you are tired of Lucy looking for her glasses, think how tiresome it is for her.

Thus does one of our best contemporary authors fall into a rookie mistake.