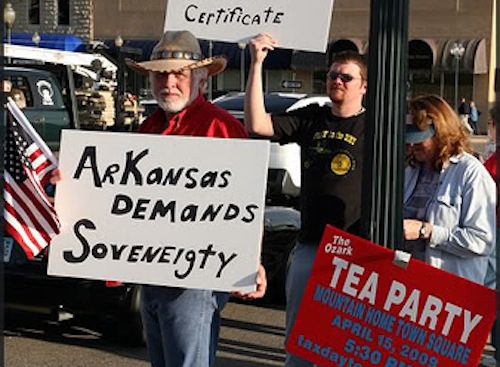 As the actual policy agenda of the Tea Party slowly condenses—like fog on a mirror held up to Joe McCarthy’s unconscious mouth—opposition to the 17th amendment is emerging as a bizarrely signature issue. If you’re like me, your visceral position on this matter can best be described as, “the what?” The 17th amendment provides for the direct, popular election of US Senators. Prior to 1913, Senators were chosen by state legislators, on the theory that the higher house of Congress would thereby be made more deliberative and less responsive to the whims of the mob. Ironic that, since at least two Republican congressional candidates swept to primary victories by Tea Party support—Steve Stivers in Ohio and Vaughan Ward in Idaho—have recently changed their position on the issue so as to appear less, um, insane. In the annals of things to say that will endear you to undecided voters, pledging to reduce the number of things they get to vote on ranks low. So we come to our usual Tea Party question: Why?