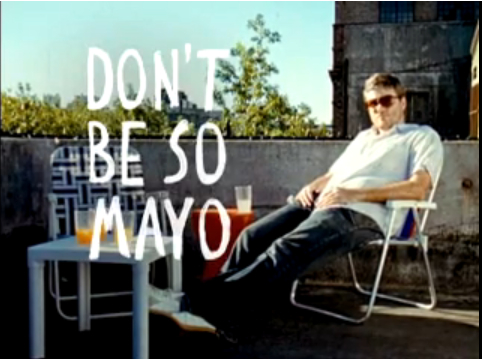 Those of you who dimly remember that Combat! blog is supposed to be about oppositional culture (and not All Health Care All the Time) might also remember one of our major theses around here: Consumer culture is not driven by the desire to conform, but rather by the desperate need to individuate. Never has that principle been so on display as in the most recent series of advertisements for Miracle Whip.* Featuring a group of twenty-something urban semi-professionals partying on a roof in slow motion—and occasionally eating sandwiches absolutely slathered in what I assume is Hellman’s mayonnaise—the ads defiantly assert the mantra of a generation: We Will Not Tone It Down. Video after the jump.

“We,” in this case, appears to mean the Millennials, the marketing cadre that finally won out in the long war to define the generation second in importance to the Baby Boomers. (Victory came suddenly, when all the members of Generation X died of pussy ache.) “It” is either our love of partying or our insistence on looking directly into the camera, both of which could probably stand to be toned down for the sake of our acting career. But screw you, Imagined Authority Figure Who Wishes to Diminish the Human Spirit For Some Reason. Don’t be so mayo.

As Seth Stevenson points out over at Slate,** the message here is that condiments are a means of expression. “We are not like the others,” the voice-over intones. “We won’t ever try to be.” In a classic ad-psych maneuver, the “we” on screen while this is being said are the aforementioned attractive young people, while the “we” referred to in the copy is, presumably, Miracle Whip. As with the insidiously-named iPod, the goal here is to blur the line in the viewer’s mind between “me” and “Miracle Whip sandwich spread/salad dressing.” The coup de grace comes at the end, when the voice over and the visual converge. “We are our own unique [sic] one of a kind [sic] flavour [sic],” the announcer says, as a child holds up an enormous sign stating same. Just like Miracle Whip, we Millennials have a particular taste. Also, don’t tell anyone, but we put ourselves in the potato salad.

The real genius of this commercial—or maybe just the part that fits best with our worldview here at Combat! blog—is the “Don’t be so mayo” tagline. There are two conflicting messages at work in the spot, and “don’t be so mayo” captures the tension between them. On the one hand, there’s the obvious emphasis on individualism. “We will not be quiet,” “we will not try to blend in, disappear in the background,”—these are the essential tropes of post-sixties consumerism, of sandwich lube consumer as nonconformist rebel. On the other hand, there’s the consistent use of “we,” and the overwhelming cultural uniformity of pretty much everyone who appears on screen.*** “Don’t be so mayo” is a negative slogan; rather than inviting the viewer to imagine what he might be if only he consumed more Miracle Whip, it threatens him with the social consequences of Miracle Whip’s absence. The message is clear: Miracle Whip, and the irrepressibly expressive individualism it represents, is a generational trend. The Millennials are enthusiastic, quirky and cool, and you can either join them or be left behind in mayonnaise country. You’re already at the party. Do you want to have fun or not?

In the interest of full disclosure, I should say that the unique flavor of Miracle Whip has always tasted to me like that weird substance your gums secrete right before you throw up. It also seems possible that the Miracle Whip people have a history of overstating their case, as evidenced by the word “Miracle” in the name of their product, which is essentially mayonnaise with a bunch of paprika in it. We’re not talking about penicillin, here. I submit to you, though, that the new Miracle Whip campaign is the apotheosis of contemporary American advertising. It combines the borderline-spiritual claims of modern consumerism—what you buy is an expression of  who you are—with the most banal product imaginable, all set to a rock soundtrack and a pack of 25 year-olds who might start making out at any moment. I want to go to that Miracle Whip party. It looks like it might assuage the inchoate longing for authentic experience that led the United States of America to develop an alternative mayonnaise in the first place. We’re looking at more than a condiment commercial, here. “Don’t be so mayo” is documentary proof of the shortage that grips the American spiritual economy; we live in a country with so much to signify and so little that is significant that we have begun to attach meaning to different brands of sandwich spread. Don’t be so mayo, America. For god’s sake, be something else.

* And with that sentence, another zero-result Google search bites the dust.

** It kills me that they beat me to this one, by the way.

*** Weirdly, everyone at this rooftop party is drinking milk and orange juice. Between that, their intemperate consumption of Miracle Whip, all the jumping around, and what I can only assume is a bunch of cocaine, they’re going to be glad they have that kiddie pool in about an hour.