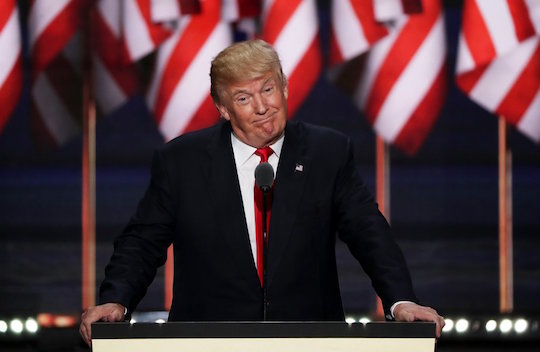 Donald Trump spoke for 75 minutes at the Republican National Convention last night, alternately aggrandizing himself, predicting doom, and assuring us he’d fix it. The theme of the evening was Make America One Again, which was a refreshing change from Monday’s theme, Make America Scared of Brown People. Yet Trump seemed to double down on separation. He adjusted his promised ban on Muslims to a ban on people from countries Muslim terrorists have “penetrated.” He did not mention any black lives that may have mattered, but he presented cop killing as epidemic, even though fewer officers have been murdered during the Obama administration than during any administration in the last 30 years. Then Trump promised to “end crime and violence very soon.” Today is Friday, and the Republican Party has nominated for president of the United States an ethnic nationalist campaigning on law and order. Won’t you consider fixing up the attic with me?

END_OF_DOCUMENT_TOKEN_TO_BE_REPLACED

A scene from the new Ghostbusters, which wisely makes everything look more badass.

“[Psychological reactance is] the feeling you get when people try to stop you from doing something you’ve been doing, and you perceive that they have no right or justification for stopping you. So you redouble your efforts and do it even more, just to show that you don’t accept their domination. Men, in particular, are concerned to show that they do not accept domination.”

Prof. Johnathan Haidt, describing the phenomenon of psychological reactance to Thomas Edsall in the Times. Props to Ben al-Fowlkes for the link.

I have not seen the new Ghostbusters movie, so I cannot say if it is good or important. Judging by the trailer, the decision to cast women is the most interesting thing about it. I am not as interested in the promise of worse jokes but better effects, or in the decision to remake a hit from 30 years ago whose charms are not just fondly remembered but hard to explain. The first Ghostbusters should not have been good. I’m not sure lightning is going to strike that premise twice. Yet rather than not seeing the new Ghostbusters because it doesn’t look funny, large numbers of men are not seeing it because it’s “all women.” On Twitter, they are not seeing it so aggressively they sent threats and racist memes to Leslie Jones, who plays the black Ghostbuster who isn’t a scientist like the other three. After Twitter banned Breitbart editor Milo Yiannopoulos for inciting the abuse, the hashtag #FreeMilo cast him as a victim of censorship. Clinical discussion of what makes people so awful after the jump.