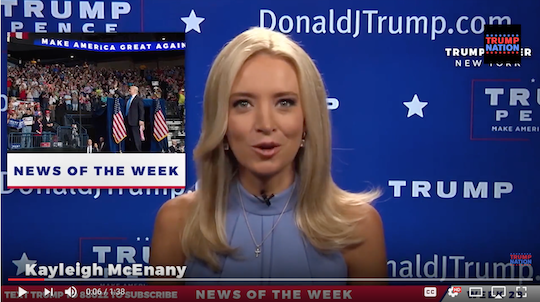 McEnany’s appearance on the real news coincides with her appointment as spokeswoman for the Republican National Committee. Previously, she was a contributor to CNN and a producer for Mike Huckabee’s show on Fox News. Between the personnel change and the more professional look, it’s tempting to conclude that the RNC is producing the real news now, but it remains unclear who makes this show. It runs on Trump’s Facebook page, and it claims to shoot in Trump tower, so it makes sense that it would be a product of the Trump PR team. But this installment bears the RNC’s fingerprints, not just in staffing and production but in message. 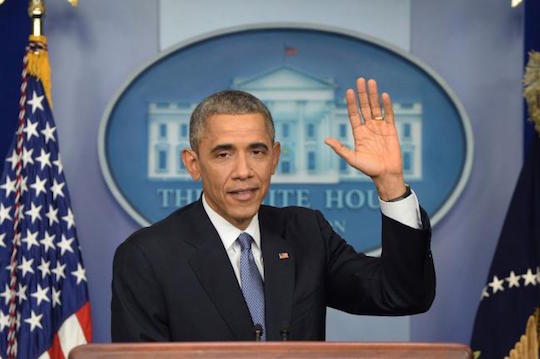 Maybe it was just that 1/20th of a second, but Barack Obama looks really, really tired. Perhaps his facial muscles aren’t used to his new “fuck it, we’ll do it live” approach to governing. Since the 2014 election, when Democrats across the country ran from his agenda and lost anyway, the president has both embraced bold action and reaped the benefit of long-term policies. The stock market is at an all-time high, he has outperformed Reagan on job growth—or not, depending on whom you ask—and his approval rating now approaches that of Reagan in his sixth year. Ronald Reagan! The greatest president in American history, provided you pieced together American history from Sarah Palin speeches. But I presume conservatives will rally behind Obama now, since the indicators suggest they should.

END_OF_DOCUMENT_TOKEN_TO_BE_REPLACED 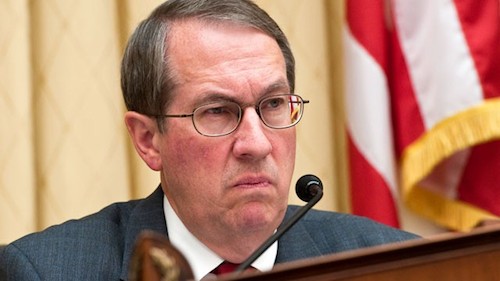 Rep. Bob Goodlatte (R–VA) responds to allegations that his name is made up.

Yesterday, during committee markup of a probably-doomed abortion bill making its way through the House, Rep. Bob Goodlatte argued that restricting access to abortions creates jobs. “Having new children brought into the world is not harmful to job creation,” he said, himself employing litotes for a job it maybe didn’t need to do. It was a peculiar line of reasoning, partly for the sheer bulk of its verbiage—more on that later—and partly because of its ambitious attempt to connect an old controversy to the political byword of the day. Strap on your chunky glasses, because Rep. Goodlatte is the subject of today’s Close Reading.

END_OF_DOCUMENT_TOKEN_TO_BE_REPLACED

Congress voted Wednesday to reaffirm “in God we trust” as the national motto, re-enshrining the slogan as okay for public buildings, schools and other government edifices. Before Wednesday, the official national motto was “in God we trust.” The House basically introduced a law expressing its support for the existing law about which saying we like, and then it spent the afternoon voting yes. Meanwhile, the Republican delegation has filibustered the President’s jobs bill. Regardless of how you feel about that proposed piece of legislation—or its constituent parts, which will rise from the dead and lurch toward the Senate floor for the rest of the year—it’s worth noting that Congress did not spend Wednesday debating alternate jobs plans. In the midst of our protracted economic convalescence, the United States Congress has decided to hold still and declare our trust in God.