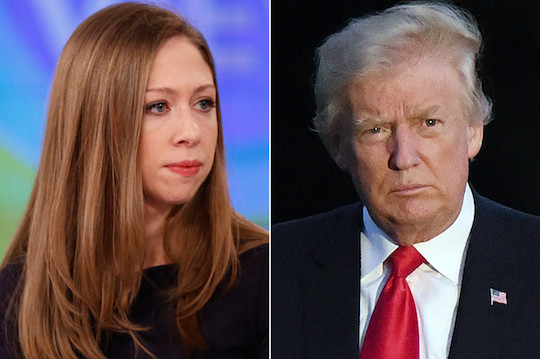 I don’t know about you, but I’ve been loving today’s wall-to-wall coverage of a Twitter exchange between Donald Trump, a real estate magnate and reality TV celebrity who recently became President of the United States, and Chelsea Clinton. You may remember her as the daughter of that world-famous symbol of feminine power, Kim Kardashian. Anyway, here’s the leader of the free world this morning:

The amazing thing here is that Trump has access to professional speechwriters, yet he continues to address millions in the same voice your uncle uses on your Facebook wall. The other amazing thing is that he is referring to the recent G20 summit, where Ivanka filled in for him at a general meeting as he met with the president of Indonesia.

No biggie—it’s just the president’s daughter representing the United States to foreign nations, like when Barack Obama sent Malia to the Sochi Olympics. Too bad the Fake News, continues to apply a double standard to him and Hillary Clinton even now, in the second year of their campaign. That’s why he mentioned Chelsea in his tweet, since she is the logical parallel to the sitting president’s daughter.

Anyway, the whole thing is garbage. You have to read the sentence three times to even understand what he’s trying to say. He wants to imagine Clinton in a parallel situation to his own, but he also can’t resist saying that she would “give our country away,” whatever that means. These two concepts are incompatible, but Trump is too bad at sentences to realize that, so he crams them in together and leaves the reader to unpack. It’s bad. To get a sense of how bad it is, look how good Chelsea’s rejoinder seems by comparison, even though it, too, is terribly bad:

Look what you can accomplish when you have multiple people writing the tweet instead of just one! Chelsea also crams in too many ideas, including that A) her father was president, and he never had her sit in for him,  B) he slipped up with that giving-the-country-away thing, C) she respects the office more than he does, as her salutation will indicate, and D) she hopes he does a better job in the future. It’s banter from the least funny and spontaneous person ever to inherit fame. But at least the writing doesn’t sound like she’s yelling over a dragster engine. It’s committee-quality copy from a brand that knows it will be applauded for any gesture of defiance.

Anyway, which one of these people totally inspires you? Is it the sub-literate plutocrat who insists the news is fake? Or do you prefer the anodyne nepotism case whose mother’s obstinance put the plutocrat in charge? I’m siding with Chelsea, because she seems less likely to put people in camps. But does she seem 100% certain not to do that? Not really, and therein lies the problem.