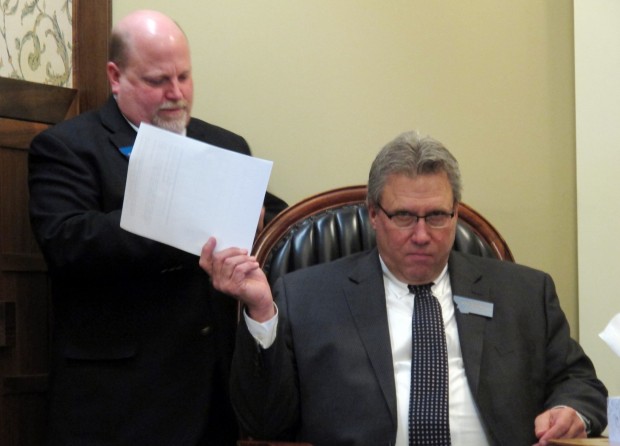 The Republican Party of Montana elected Jeff Essmann its party chair last month, replacing Will Deschamps after six years. Essmann was president of the senate in 2015, so this move finally unites the two branches of Montana’s state government: the Republican legislature and Republican politics.

You may remember Essmann from the most wonderful email chain in the world, in which he discussed ways to reduce the power and perhaps number of moderates in his party with then-majority leader Art Wittich (now the representative from Glendive) and then-senator Jason Priest (now convicted of partner/family abuse.) Arguably, Essmann’s struggle with moderates began when he defeated Jim Pertersen in the 2011 vote for senate president. It hit a snag this past session, when Democrats joined moderate Republicans to pass Senator Ed Buttrey’s (R–Colstrip) Medicaid expansion compromise. But now that Essmann is party chair, it appears the conservatives have won.

He has a mandate. He controls the machinations of his party and the levers of the senate. And from this catbird seat, he sent an email to the state’s Republicans calling for “examples large and small” of bureaucratic failures under Democratic Governor Steve Bullock.

“It is our goal to develop a list of all these failures and begin a drumbeat of steady criticism,” he wrote, echoing the dream of ancient Greeks as they built the first democracies. You can read all about it in this weeks’ column for the Missoula Independent.

I know many of you struggle to explain why Montana politics is important to your lives—and possibly, on a causal level, it is not. But my lands, it’s entertaining. Everyone is crookeder than a dog’s hind leg and lacks the skill or the inclination to keep it secret—except for the ranchers and schoolteachers who make law 90 days every other year and take it really seriously.  The news from Helena is like a musical about trying to save the town from speculators, but without the songs. So it’s perfect. I encourage you to get hooked.

If you like totalizing theories of economics the way I do—which is to say, if you like reading descriptions of those theories—you have probably heard about Thomas Piketty and Capital In the 21st Century. The English translation of the 700-page book has been well-received since its publication last month, and Piketty has been interviewed in just about every outlet imaginable, including the New York Times. That one is worth reading, if for no other reason than for his observation that the income distribution that characterized the late 19th and early 20th centuries, when “the top 10 percent of the distribution was full of rental income, dividend income, interest income,” is coming back.

END_OF_DOCUMENT_TOKEN_TO_BE_REPLACED

Pete Jones sent me this commercial for the new Axe odor replacement product, which will apparently render meaningless all previously articulated principles of morality and real estate. Those are three jewelry stores next door to one another in the opening shot, and they’re not in the diamond district. They appear to be on Lafayette Street, but that’s not important. What’s important is that everyone understand the premise of this deodorant ad: jewelry store robbery, apparently involving machine gun fire. You can hear it for the first two seconds of the video, followed immediately by our robber emerging from a store that is definitely in the diamond district now. Since the glass windows are unbroken and there’s no blood on him, I can only assume that all six of his shots hit center mass.

END_OF_DOCUMENT_TOKEN_TO_BE_REPLACED 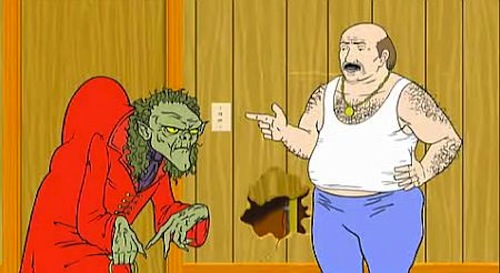 First, I’m warning you right now that there is going to be way less Combat! blog than you want this week, yet way more than I actually have time to write. Here’s a pro tip for all you freelancers out there: tell everyone you’re going on vacation. I have received more projects labeled “emergency” since I went on vacation than I had previously gotten in my entire career. The next time you see me, I will be wearing a panda skin monocle. Second, the Theory of Taste promised in the headline is not the useful kind of aesthetic theory. It is a theory of my taste, which is notoriously bizarre. Ready? Yesterday, while inflicting an interpretive rendition of a cartoon I had seen six years ago on my brother, who has long since reconciled himself to such tortures, I realized that there is a through-line in much of the animated humor that I like: ultra-naturalistic dialogue and voice acting in the context of fantastic situations. I think that cartoons in which monsters, superheroes, space cowboys and other fantasy characters have to live in apartments and work at jobs are hilarious. Those of you once forced by the pursuit of English degrees to read the execrable Gabriel Garcia Marquez are familiar with the literary genre known as magical realism, in which key aspects of human consciousness go unaddressed in favor of love turning women into butterflies. That sucks. But what does not suck is the style of humor that I’m going to call Fantastic Naturalism.