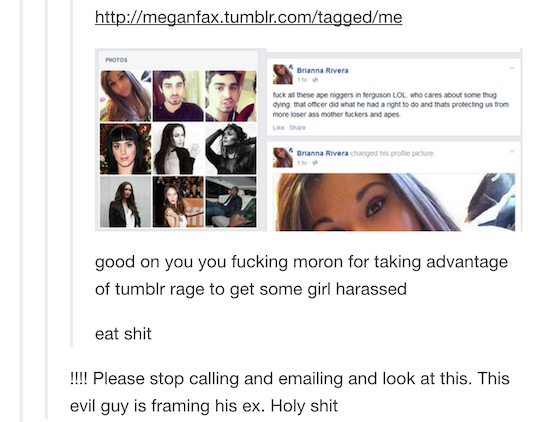 Free and democratic discourse from Tumblr

For the last week or so, one of my favorite Twitter feeds has been Yes, You’re Racist, which retweets racist posts about Ferguson. It’s awesome for several reasons, one of which is the irony of people who want to use a global platform to disseminate their views freaking out when people across the globe read their views. That’s good fun. I’m mostly a believer in shame as an enforcement tool, but it’s important to remember that not everyone on the internet is speaking with her own voice. Consider Brianna Rivera, who became the object of a campaign to get her fired from her job after her ex-boyfriend spoofed her Facebook account to post racist status updates. Props to Willy for the link. Today is December 2, 2014, and you can frame people for racism now.