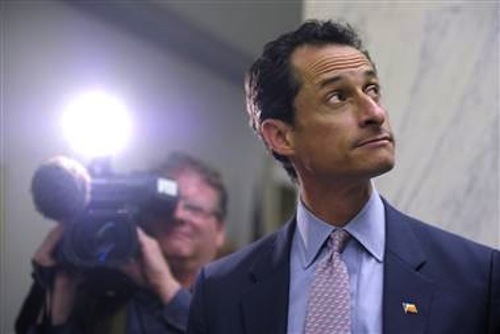 Representative Anthony Weiner, in jacket, shirt, tie and socks, waits for Ronnie to set up the shot.

Hey—what do Brett Favre, Kanye West and Anthony Weiner have in common? They’ve all distracted us from critical problems in American politics and culture. Also, they’ve all conducted peer-reviewed experiments proving that becoming rich and/or famous does not make your penis larger. It also doesn’t make you smarter. Yesterday, Representative Anthony Weiner (D–NY) announced that yes, it was a picture of his boxer-briefed semi sent to that woman on Twitter, and yes, he sent it. That previous story about how a hacker got into his Twitter and sent a mysterious picture of someone’s dick to one pretty girl from his followers list? Yeah, saying that was a bad idea. Come to think of it, that was probably the second worst idea Anthony Weiner had all month.

END_OF_DOCUMENT_TOKEN_TO_BE_REPLACED

There’s been a lot of discussion around here lately about the fear of reverse racism and the increasingly popular trope that white Christians are the victims of institutional prejudice. It’s hard not to notice that this irrefutable fact of American life was discovered immediately after a black man became President, and also that 66% of the people in this country are themselves white, which should make it fairly easy to bring the orchestrators of this cruel anti-white society to justice. Herein lies the problem. Historically, when a minority group tries to do something about racism, it leads to a more just society (Montgomery 1955, Stonewall 1969) or brutal repression (all human history prior to 1955.) When an overwhelming majority tries to address its racial victimhood, the results are somewhat less reliable (Berlin 1938.) It’s hard not to see, in the racial complaints of the white, wealthy and increasingly powerful Tea Party, a vague threat.