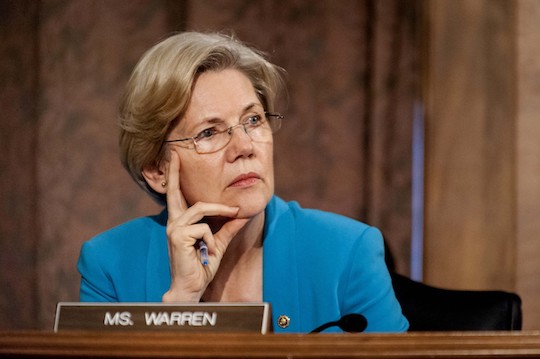 Yesterday, as the Senate heard testimony regarding the almost certain appointment of Sen. Jeff Sessions (R–AL) to the position of attorney general, a weird scuffle erupted between Sen. Elizabeth Warren (D-MA) and Majority Leader Mitch McConnell (R–Home for Orphan Turtles.) Warren was attempting to read a 1986 letter from Coretta Scott King, wife of Martin Luther King, that accused Sessions of using “the awesome powers of his office in a shabby attempt to intimidate and frighten elderly black voters” when he was US attorney for the Southern District of Alabama. McConnell moved to silence Warren under Rule XIX, which forbids senators from “ascribing to another senator…any conduct or motive unworthy or unbecoming a senator” during debate. Here’s a video:

In this scene, the role of Frightened Lackey is played by Montana’s own Sen. Steve Daines, who looks like he has either eaten bad fish or does not want to adjudicate a rules dispute involving the leader of his caucus. Daines sided with McConnell, of course, and Republicans voted to formally silence Warren. Three questions seem relevant here:

In another world, Warren spends the next four years slipping from the national spotlight, as Republican control of all known branches of government denies her the forum to publicly grill bankers in the ways that have made her a progressive hero. Or they could martyr her. McConnell seems committed to the second course, even going so far as to furnish a title for her memoir by complaining that “she was warned. She was given an explanation. Nevertheless, she persisted.” This approach seems less than tactically astute. Sessions is going to be attorney general. If Betsy DeVos proved anything, it’s that none of Trump’s appointments will go unconfirmed. So why not let Warren read King’s letter to a mostly empty chamber and a couple thousand viewers on C-SPAN?

Instead, he contributed to her reel. As of this writing, the video of McConnell silencing Warren featured in this post has 350,000 views. That’s just this version; there are a dozen more on YouTube and floating around the internet. Is the majority leader really foolish enough to make a spectacle of Warren’s censure, when the action itself accomplishes so little?

Apparently, he is. The explanation that he is intentionally making Warren the face of the progressive Democratic Party, in the hopes that she will overplay her hand and tarnish that brand in the future, seems a little too 3-D chess to be plausible. Remember the poker player’s rule: don’t assume intelligence. It seems like McConnell has blundered here, possibly because there are no longer any checks on his power. This silver lining is itself mostly dark cloud, but perhaps Republicans will keep overplaying their hands.