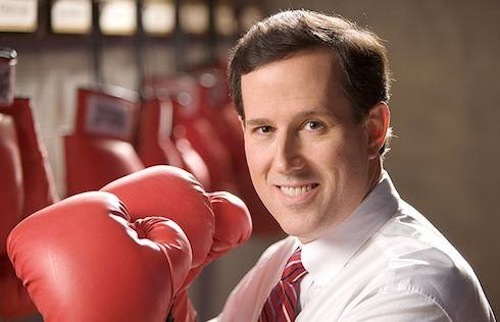 I love him, too. It might be because he has been mathematically eliminated and therefore poses little threat to the American presidency. First off, that is the sort of top-notch journalism I have come to expect from Time magazine—just running press releases verbatim as news. Second, Rom-bot is right. In order for Santorum to achieve objective: America President, he would have to secure almost all vote units between now and August—highly improbable, calculates Rom-bot. Maybe a string of victories in spring and summer would give Santorum the momentum he needed to poach delegates at the convention and steal the nomination. And maybe the general election will by marked by civil debate over pressing domestic issues.

You see what I did there. Now that Santorum is not really a candidate for president, we can safely treat him as what he always wanted to be: an idea. As an objective-correlative for just how radically different a person can be from everyone you know and still be a citizen of the same country, Santorum is the best thing since, um, Mississippi and Alabama. He is a monument to the strain that ideological consensus can bear in a contemporary democracy. While our generation is deciding whether it is a moral obligation to text someone you met at a bar after you have sex with them, he is decrying pro sports and connecting condoms to Satan.*

The dude is undeniably American—just look how white and boyish—but he talks like a Russian Orthodox priest.

He is a symbol of the alien among us, in other words, just like the snatched bodies in Invasion of the Body Snatchers. Santorum reminds us that, in addition to the fun kind of oppositional subculture that wants to destroy families and wreck everyone’s mind with Chingy, there’s a whole other op-sub-cult that wants to undo our decades of work. He is to living with your girlfriend as Mississippi is to America.

Which is to say he is a pleasant reminder that we are still moving forward fast enough to leave people behind. I’m not sure I have the statistical abstracts to back this up, but I suspect that Alabama and Mississippi are two of a very small number of states that virtually every historical advance has made comparatively worse. Back when Americans were all iron-folding mound-builders or dudes who had to kidnap people to plant rice for them, Biloxi was a pretty great place to be. It’s been a downward-trending line ever since. Is it any wonder that Santorum, with his campaign to return us all to our grandparents’ childhoods, has enjoyed his two biggest victories there?

The good news is that A) the methane-breathing canary can only live in the mine and B) American democracy is still sufficiently robust to ignore whole states. The smug elitists who don’t think government should regulate doin’ it have control of both parties, even if our grip on one is frighteningly tenuous. To the news that Santorum has essentially been mathematically eliminated, the good people of Alabama and Mississippi respond with one voice. What the fuck is math? they say. To which the rest of us reply: it is the thing that leaves you behind. Now shut up and enjoy your federal assistance.