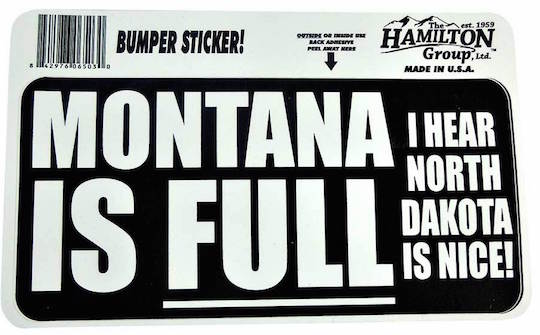 Montana is extremely popular with people who live in Montana. In terms of the portion of the population wearing shirts advertising where they are at that moment, it is the Creed concert of states. The flip side of this admirable spirit is nativism—the perception that people from California and other, unforgivably non-Montana states are flocking here in droves and, you know, ruining everything. “If I find out someone’s from somewhere far away I am rude to them,” says H.J. Schmidt, who may just be sensitive about his name. “I get annoyed and angry. I feel [like] ‘you were in your place and it got ruined. Now you are coming to my place to ruin it.'”

Forgive me, Montanans who have welcomed me and only occassionally accuse me of foreignness based on my (local) haircut, but that is some hick shit. When I was in grad school, my neighbor remarked that she’d “lived all over—Bozeman, Billings, Kalispell, and now Missoula.” That kind of provincialism is a natural consequence of living somewhere big, rural, and conscious of itself as such. But the idea that Montana is under siege by people from outside the state is not accurate.

According to this handy map of interstate migration produced by the New York Times, a higher percentage of Montana’s population was from Montana in 2012 than in 1950 or 1900. It may be generally agreed that people from other places are flooding to this state, but there are objectively more native Montanans around to smugly agree with that than at any time in the state’s history. The invasion of the Californians isn’t real.

There are a couple of caveats here: one, these numbers look at the state as a whole. In marquee cities like Missoula or Bozeman, the ratio of out-of-staters to natives is probably much higher. I’m not sure that someone from Billings has any more claim on Missoula than someone from Seattle, but the nativist narrative makes more sense in the larger towns. Montana as a whole, though, harbors fewer out-of-staters than it ever has.

Maybe that’s why the nativist narrative is so popular. For sheer variation in scenery and number of natural attractions, this state is probably vaster than the whole Midwest combined. It’s easy to live a rich, satisfying life just in Montana, surrounded by Montanans who agree that this is the Last Best Place. But as nice as it is, this state is not so different from everywhere else.

It only seems that way if everywhere else is somewhere you know only by reputation. I love Montana, but I do not care for nativism. It’s not an achievement to live in the place you were born. You don’t get to simultaneously believe that you’re more humble and decent than other people and drive around with a sticker on your car that says “Welcome to Montana—now go home.”

It’s great that we all love Montana. I’m from Des Moines, where complaining about Iowa runs a close second to the weather in popular conversation, and it’s nice to live somewhere people feel good about. But it’s frustrating to hear a stranger say she can tell I’m from somewhere else, as if the cultural gap between two US states were insurmountable, as if she were patiently putting up with waves of immigrants.

There are more Montanans in Montana than ever before. Montana is “full” with the third-lowest population density of any state. It’s full of proud, well-meaning people who, on this issue, don’t know what they’re talking about.