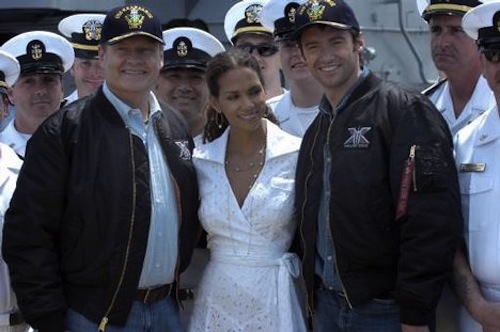 First of all, everyone who said I would never figure out a way to work a Down Periscope reference into this blog owes me a Coke. I know you were all saying that. Second of all, thanks to everyone who alerted me to Combat!’s horrible comments problem, by which perfectly innocent remarks about how insightful and probably handsome I am are rejected as spam. It turns out that several clever Viagra salesbots have been submitting comments that are copies of previous comments, only with links to boner pills added in, in an effort to fool my spam blocker. I guess, technically, they did fool it, but they fooled it into putting everyone whose comments got copied on its spam list. The only solution I’ve found thus far is to manually un-spam legitimate comments, which I will continue to do until the spammers give up. I assume that’s only a matter of time, since they’re computer robots and all. But enough of that. Today’s post is not about computer robots; it’s about real Americans like Kelsey Grammer, who is the spokesman for a new cable TV channel for real Americans called Right Network, which will premiere this real summer in America. Spit out your Skoal, ’cause here comes a taste:

Obviously, this thing is going to be really good and not exacerbate any existing problems at all.

In case you’re wondering who that dude dressed like the dudes whom television executives imagine to live in Searchlight, Nevada when they tell dudes how to dress is talking to, it’s a Tea Party rally in Searchlight, Nevada. The Tea Party seems to be the target demographic for the Right Network, which “focuses on entertainment with Pro-America, Pro-Business, Pro-Military sensibilities.” Their Pro-Unnecessary Capitalization position also agrees with that organization. Don’t worry, though—Right Network isn’t just a cynical attempt to cash in on a cultural-political fad without contributing anything of substance to the national conversation. According to spokesmen, the network wants “to entertain, engage, and enlighten Americans who are looking for content that reflects and reinforces their perspective and worldview.” You know what the problem with the Tea Party is? They’re not sufficiently immersed in content that reinforces their worldview.

Lest we forget, there’s one more way in which the Right Network resembles the Tea Party: their willingness to make public statements that are not—technically, one hundred percent, from the perspective of elitist logic—true. While the network’s promotional materials say it will be broadcast “through partners including Comcast,” Comcast released a public statement saying, “We are not a partner, we don’t have an investment with them and we don’t have any plans to distribute the network at this time.” One of Right Network’s investors is Ed Snider, who is also chairman of Comcast-Spectator, the Philadelphia sports and entertainment company in which Comcast is a majority owner, so a deal does seem likely. Still, it’s possible that, like the real America, the Right Network will turn out to be a thing that everyone agrees is definitely happening and then doesn’t exist.

In the meantime, though, they’ve got Kelsey Grammer. Here he is talking about your intuitive sense of right and wrong, which is definitely not connected to ingrained prejudice:

If you were among the 53% of Americans who did not want to punch Kelsey Grammer in the neck before you saw that video, welcome to the other side. Besides indicating that straw men are apparently totally right, Grammer’s spot gives us some insight into what Right Network is going for. I was initially going to describe it as a list of things you probably disagree with if you’ll like the Right Network, but then I watched it again and realized that almost none of the things listed are propositions. The spot is more Jeff Foxworthy than Bill Kristol.* 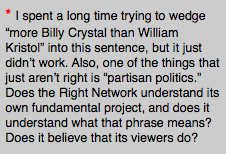 Sure, you can argue that “big government” can be translated to the essential proposition “government intervention is the means by which certain social objectives can best be addressed,” but items like “grape vodka” and “cats on leashes” are just hazy elements of an imagined urban lifestyle. This phenomenon can be more clearly observed in “group hugs” and “baby carrots,” both of which seem somehow connected to, I dunno, hippies or something, just like a federal health insurance exchange.

These vague cultural signifiers, presented under the assertion that “some things just aren’t Right,” operate under the assumption that politics isn’t a means of government so much as a lifestyle. Conservatism isn’t a set of specific policies or even politicians; it’s being pro-America, pro-business, and pro-military. Never mind that the very project of democracy presumes that we’re all pro-America, that most people would describe themselves as “pro-military” at least in the sense of “in favor of current and former members of the US military having as easy a time as possible,” and that the pro-business policies of the Bush and Obama administrations are what gave us “bailouts for billionaires.” For an ostensibly political channel, Right offers surprisingly little programming related to news or commentary. The homepage advertises three shows: “Running,” about first-time candidates for public office, “Right to Laugh,” about stand-up comedians performing in what appears to be a community theater rehearsal room, and “Poker and Politics,” which somehow does not involve Colin Quinn. All three shows are about politics to roughly the same degree that a Cadillac Escalade is about off-roading.

In this way, the Right Network is a perfect fit for the Tea Party, because it takes the propositional quality out of political statements. Politics isn’t about what you think we should do—it’s about who you are. That’s why you can be against government spending and for the Iraq war, or pro-business and anti-TARP, or in favor of both balancing the budget and lowering taxes. American conservatism isn’t a policy agenda derived from a set of ideological principles; it’s a pickup truck and a cowboy hat. It’s the real America: totally ignorant, proud, and now furnished with one more cable channel to insulate them from anybody else’s ideas. I agree with Kelsey Grammer: some things just aren’t right.