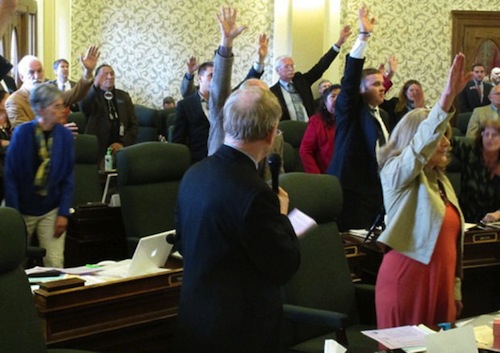 Democrats try in vain to be recognized by the President of the Senate Friday.

Last Friday, Democrats in the Montana Senate attempted an obscure parliamentary maneuver to block passage of two voter-referendum bills, SB 405 and SB 408, that would end same-day voter registration and institute a top-two primary system. Instead of just doing it, though, they first held a party caucus to explain what was happening. Republicans caught wind, and the ensuing refusal of Senate President Jeff Essman (R–Billings) to recognize any Democrats on the Senate floor ended in a small, polite riot. You can read about it in my latest column for the Missoula Independent, which has received this glowing review from commenter Scott Wilson:

Typical one-sided Leftist rant. You Democrat-socialist-communist types want same-day registration to get more ineligible people voting and their votes counted. Absent voter fraud, the unaccountable, lawless, oath-breaking Kenyan would not be president vying for position as King and High Ruler. Enough. Sounds like the Republicans should be commended. Sore losers are still losers.

We’ll be back tomorrow with another one-sided rant.