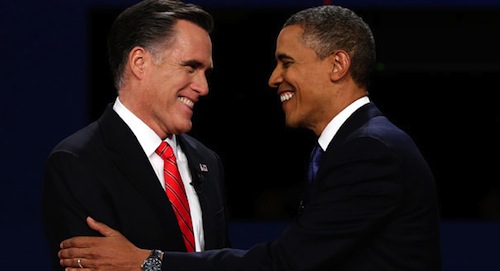 If the internet has reduced your brain to a stimulus/response meme generator, the most exciting part of Tuesday night’s debate was Mitt Romney’s “binders full of women” remark. It was weird! He kind of misspoke! Let’s put it on that “walk into Mordor” thing! For my money, however, the strangest moment in the presidential debate was when moderator Candy Crowley corrected Romney regarding Obama’s use of the word “terror” after the attack on the US consulate in Libya. He did say that in the Rose Garden the day after the attack. What Romney claimed was not factually accurate, or strictly correct or, you know, true. But was he lying?

I do not think I am making a controversial assertion when I say that lying is on the rise in our politics. Maybe it isn’t; maybe news coverage is on the rise, and we just get more thorough reports of the steady number of lies our candidates and officials have been producing since time immemorial. I don’t think so, though. I suspect that the ascendance of Super PACs and the spreading belief among both parties that they must win by any means necessary have increased the total number of lies American politics generates. Lord knows we think it has, and that alone is likely to make people feel like lying is okay. Somehow, we expect it.

Yet it remains absolutely not okay to call another person a liar. Along with what are you looking at?, are you calling me a liar? is way up there on the list of phrases that precede a fistfight. One of Mitt Romney’s monosyllabic offspring even said on the radio that he wanted to “take a swing” at the President of the United States for calling his dad a liar. In an election year that has seen Dinesh D’Souza accuse Obama’s mother of prostitution, directly calling the other candidate a liar remains oddly verboten.

The rule is not limited to the campaign podium, either. Virtually every fact check article begins with some bland assertion that both candidates played rough with the facts on Tuesday night, and most use the passive construction “checking the claims made by President Obama and Mitt Romney.” Partly that’s a function of the form; such articles are about the facts and claims themselves, after all, and no one prizes his neutrality more highly than a fact-checker. Yet that neutrality becomes a false equivalence when one candidate is lying much more than the other.

Consider Salon’s live fact-check of the last debate. You can argue that Alex Seitz-Wald’s selection of facts to check reflects Salon’s bias, but the fact remains that one man in that article produces more and clearer falsehoods than the other. He happens to be the man whose tax proposal contains a plan and an outcome with no connection between them, and who keeps saying that six studies which aren’t studies support it when they do not. One of the “studies” is a Wall Street Journal op-ed. Presumably, Mitt Romney knows that. He is lying.

Yet the gap between that plain declaration and “Romney’s statement appears to be inaccurate” will not close. In a politics beset by lies, we maintain the gentlemanly conceit that no one would indulge in untruth just to win a presidential election. To violate this presumption, especially in a debate, is universally regarded as unpresidential. To keep saying that your opponent has doubled the deficit—a mathematical assertion that has been debunked repeatedly by numerous outlets—is just fine.

What we have here is a mendacious system that continues to presume honesty, not because we love comity so much, but because we don’t want to admit how far we have come. In 2012, the United States has a campaign finance system that allows anonymous groups to spend unlimited money saying whatever they want, and a media abandoning every principle but biggest audience. Maybe that’s the democracy we want. If it is, we should admit to it, and if we can’t admit to it we should consider how our courtesy might be doing what our conscience failed to accomplish. Nobody wants to say “liar” because that’s a terrible thing to call someone. But that’s because it is a terrible thing to be, whether we acknowledge it or not.