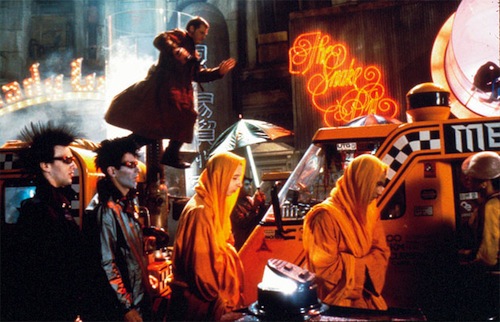 It is a good business decision for Facebook to let users delete posts and ban other users from their walls. A sad Facebook indeed for the seventh-grader whose wall comprises twenty testimonies to how fat she is, and seventh-graders are Facebook’s target audience. Grow the user base, Facebook. As a network communications medium, the service is stronger the more people use it. Also, the more we use Facebook the more we should think about how it works.

On your Facebook page, you can delete what people say about you. If you say too much crazy stuff, Facebook can delete you. Sarah Palin’s social media and youth outreach intern deleted me, and now I can’t smugly point out what a stupid liar she is. Fortunately, Facebook is bullshit. But if it were our primary medium of communication—or if an agglomeration of services like it became our favorite way to communicate—we would have to consider how it related to the democratic ideal we call free speech.

Like most kinds of quote-unquote free speech, talking on Facebook is not free. It’s free to us, but it actually costs weird nerds in California millions of dollars to run. The nerds can unplug it, and it follows that they have the right to edit its content however they see fit, the same way a newspaper publisher gets to decide what he prints because he pays to run the copies. Social media differ from newspapers in an important respect, though: most of their content is user-generated, or at least user-edited.

Were Palin to publish her series of made-up facts about the Affordable Care Act in a newspaper, I could not append an essay from the NEJM refuting them. Where a newspaper is a medium of discourse, a social website is a medium of debate. Perhaps Facebook was not intended to function that way, and we were all supposed to use it to list what bands we like and otherwise fill out the world’s most complex marketing survey. But in 2012, a former candidate for the vice presidency of the United States uses Facebook to discuss legislative policy.

She does it on her own forum, rented from Facebook but administrated by her. Probably, she likes it that way. Palin is notoriously averse to debate shows or even interviews; she prefers to speak uninterrupted for several minutes and then receive applause. Facebook is perfect for her, since anyone who asks an unpleasant question vanishes from her wall. Her page is a famously easy place to have your comments deleted, with even supporters complaining that they’ve been banned for innocuous remarks.

That kind of power over speech—the power to delete speech—makes a medium function analogously to a country with a bad government. On Facebook, I’m not allowed to refute Sarah Palin. It’s exactly as if the government prevented me from criticizing Sarah Palin, except for two differences:

1) When the government censors speech, it’s immoral. When property owners censor speech in their own media, it’s a right.
2) Facebook is bullshit.

Fortunately for us, item #2 obviates the need to resolve item #1. As the internet becomes the primary communicative medium of our society, however, we might consider what it means to talk in a way that leaves no physical record and can be annihilated by the people we’re talking to. Not long ago, the Supreme Court declared that money is a type of speech. As funded speech—Super PAC ads, social media websites, even email—occupies a larger and larger wedge in the sphere of discourse, we should think about what remains for speech that is free.