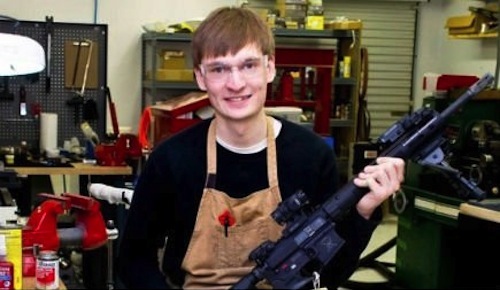 Brennan Moss of Moss Firearms in nearby Jasper, GA

Back in May, the Brady Center to Prevent Gun Violence filed a lawsuit against the town of Nelson, Georgia, which passed a city ordinance requiring all heads of households to own at least one gun. In a settlement last week, the city council declared that the law “cannot and will not be enforced,” according to NBC News. According to the Nelson police chief, that was the idea all along. Councilman Duane Cronic agrees, likening the law to the security-company signs on certain suburban homes. “Some people have security systems, some people don’t, but they put those signs up,” Cronic said in April. “I really felt like this ordinance was a security sign for our city.” Consideration of how a law should differ from a deceptive yard sign after the jump.

First of all, the rap name “Duane Cronic” is hereby taken, as is possibly “Councilman Cronic.” Second, the mandatory gun ownership ordinance is not exactly like a security sign for the city—and not just because the city of Nelson presumably also has the power to erect signs. A security sign is a deterrent. It discourages people from breaking the law, whether by bluff or by honest warning. By comparison, this law requires people to do something. Historically, American laws have prohibited certain behaviors rather than requiring them.

Also a law should not be a bluff. Councilman Cronic’s claim that Nelson passed an ordinance it had no intention of enforcing is dispiriting in the extreme. For one thing, citizens should always be suspicious of the assurance that, don’t worry, we won’t enforce this crazy law. Nelson seems like a friendly town, but conceivably there might come a day when one of its 1,200 residents becomes unpopular without doing anything illegal. Could the cops pick him up for not owning a gun, even though—and perhaps because—no one takes that law seriously?

Let us assume, though, that Nelson will not slip into government by fiat, and the city council only passed this law to send a message. What messages are they sending? In order:

You can see where I’m going with this. The law is not an instrument of communication. It sort of is, of course, and has been at many points in American history, but particularly at the municipal level it should provide rules for civil life rather than the content of that life. There is already a name for a thing a governing body passes that sends a message and does not engender enforcement. That thing is called a resolution.

But a law sounds so much better. “Every household should own a gun” is nice as far as it goes, but it does not express the same forceful confidence as “the city of Nelson requires every household to own a gun.” That’s the kind of headline-grabbing move that shows everybody you believe in the importance of gun ownership, even if it also implies you don’t believe quite as strongly in the importance of municipal ordinances.

Therein lies the danger of symbolic laws. This year’s session of the Montana legislature saw a bill requiring that state representatives be paid in gold coins, a bill declaring local sheriffs the highest-ranking law enforcement personnel in America, and a bill subjecting to arrest ATF agents who try to enforce federal gun laws within the state. All of these symbolic laws sent powerful messages, and they also made the lawmakers who proposed them look like utter jerkoffs.

Lawmaking is a craft. Hammurabi is not remembered for the bold statements his code conveyed, but for the way he made it possible for large numbers of people to live together. The law is a blueprint, not a painting. If it describes a house that will not stand, or one that no one intends to build, it loses its value. If I were king, I’d say a bunch of things I had no intention of enforcing, too.