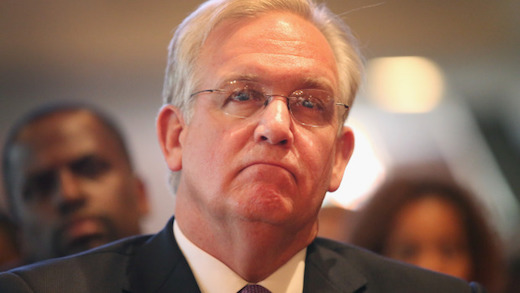 Yesterday, Governor Jay Nixon issued an executive order declaring a state of emergency in Missouri “to protect civil rights” ahead of a grand jury’s decision on whether to indict Ferguson police officer Darren Wilson. You may remember Wilson from August, when he shot unarmed black teenager Michael Brown and touched off protests followed by riots in the largely black suburb of St. Louis. You may also remember the term doublethink from George Orwell’s novel 1984. I quote Gov. Nixon’s executive order:

If there’s one thing guaranteed to protect civil rights, it’s the Highway Patrol, city and county police departments acting as a unified command over areas of protest. If there are two things that do that, it’s a unified police command with plenty of tear gas.

There’s not much reason to believe the Wilson grand jury will announce its decision soon. It’s expected to decide whether to indict in mid- to late November, so we’re talking about the possibility of a negative public response to one of two possible decisions that could possibly be announced in the next two weeks.

But law enforcement is taking no chances. On Friday, the FBI issued a bulletin warning local police departments that:

“The announcement of the grand jury’s decision…will likely be exploited by some individuals to justify threats and attacks against law enforcement and critical infrastructure. This also poses a threat to those civilians engaged in lawful or otherwise constitutionally protected activities.”

It’s nice that the FBI is keeping an eye out, nationally, for unpopular state actions that might trigger the need for law enforcement to quell public demonstrations. They’re not suggesting that police disperse legal protests, of course. But the likelihood that a bad element will “exploit” the grand jury decision threatens lawful protestors, so they might need to be sent home for their own safety.

To recap: the governor of Missouri has declared a state of emergency because he anticipates the people of Ferguson being very angry at a decision that hasn’t been made yet, and the FBI has told police departments to be on the lookout for widespread public dissent. Both of these measures were taken to protect civil rights.

Meanwhile, supporters of Officer Wilson launched a successful crowdfunding campaign to put a billboard over Ferguson that reads #PantsUpDon’tLoot. It’s funny because (A) it lampoons the protest chant “hands up, don’t shoot” and (B) it’s racist. Frankly, I don’t see why we haven’t put billboards in every black neighborhood that say “pull up your pants and don’t steal.” That would protect the hell out of civil rights.

Nothing excuses the use of force, though, or resistance to force. I again quote the FBI bulletin:

“The FBI assesses those infiltrating and exploiting otherwise legitimate public demonstrations with the intent to incite and engage in violence could be armed with bladed weapons or firearms, equipped with tactical gear/gas masks, or bulletproof vests to mitigate law enforcement measures.”

In the history of euphemism, has there ever been a phrase more inspiring than “bulletproof vests to mitigate law enforcement measures?” Ahead of possible protests in response to a possible grand jury decision, the FBI has warned police across America that shooting us might not be enough.

I recognize that these are the actions of only a few individuals. One of them is a governor, though, and another is our national domestic law enforcement agency. Police, the FBI and the State of Missouri have come together to shut down public protests that haven’t happened yet, and they’re doing it all in the name of civil rights. Of course you have the right to protest. This is America. But you have no right to put on that bulletproof vest.