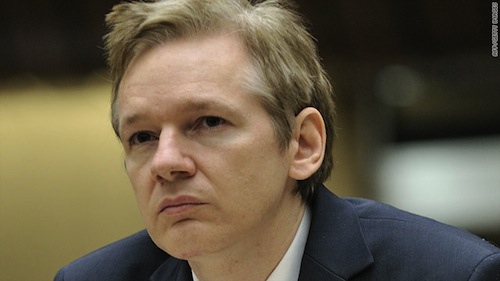 Deep in this New York Times article about Julian Assange’s sexual assault charges is another, more interesting story about Amazon’s decision to stop hosting the WikiLeaks website on its servers—a decision apparently prompted by a call from the Homeland Security and Governmental Affairs Committee. According to committee chair Joe Lieberman, staffers asked Amazon to explain its business relationship with WikiLeaks. They didn’t tell them to terminate that relationship, of course; that would be borderline-unconstitutional, and certainly creepy. They just called the multibillion-dollar web-based retailer and pleasantly inquired how many of their web servers might be connected to the activities of a publicly-declared enemy of the US government. By sheer coincidence, Amazon shut down WikiLeaks’s site a few hours later.

I wish that Amazon had taken this action earlier, based on WikiLeaks’s previous publication of classified material. The company’s decision to cut off WikiLeaks now is the right decision and should set the standard for other companies WikiLeaks is using to distribute its illegally seized material. [Wikileaks’s] illegal, outrageous, and reckless acts have compromised our national security and put lives at risk around the world. No responsible company—whether American or foreign—should assist WikiLeaks in its efforts to disseminate these stolen materials.

The “material” Lieberman refers to is, of course, information. It’s a manner of speaking, calling the mass of diplomatic cables and other official communications “material,” that comes from years of talking about classified documents. The word “material” only becomes problematic when we match it with the word “stolen.”

Information is not a material thing, and one of the most important aspects of its immateriality comes to the fore when we start talking about stealing it. Obviously, the US State Department still has all of the communiques that Assange leaked. Even if they somehow didn’t, they could download them from his website. The State Department cables are “stolen” only in the sense that the information they contain became public through illegal means.

Bradley Manning gave Julian Asssange the WikiLeaks cables, and the means by which Manning got them were surely illegal. Whether what Assange did—accept classified information from a source that got it illegally, possibly at his direction and possibly not—was illegal is a little more gray. Whether what Amazon did—provide Assange with a platform by which to make his maybe-illegally-obtained information available to the general public—was illegal is positively overcast. Yet the US government, or at least the part of it directly overseen by Joe Lieberman, has no compunction against strongarming one very large corporation to make this “illegal information” disappear.

It’s hard to tell when we’re hurtling through the moral constraints of government at such terrifying speed, but that thing on the horizon looks like an uncomfortable parallel. Back when we were tying “enemy combatants” to boards, stuffing towels in their mouths and pouring water down their noses and throats to allow them to experience the sensation of death by drowning for indefinite periods of time, we got all sorts of information. Now that we have agreed with the rest of the international community that waterboarding is torture, what do we do with that it?

By the federal government’s own reasoning, that information is illegal because it was obtained through illegal methods. We ought to seal it up and pretend that we don’t know any of it, like we do with the findings from Nazi medical experiments. Yet I suspect that whatever locations of Taliban encampments various Afghan prisoners blurted out as their brains flooded with endorphins in preparation for death are still clearly marked on a map somewhere. And I suspect that the State Department would argue that information is neutral, and it’s okay for us to know it now regardless of how we got it, because it’s important.

I’m not sure if what Julian Assange did was right. I am sure it wasn’t an act of terrorism, unless we’re now willing to define terrorism as “telling people stuff the US government doesn’t want them to know.” I am also sure that there is nothing illegal or even immoral about reading those diplomatic telegrams. If we’re going to let a congressional committee act as if it were illegal to let other people read them, maybe we should start laying down some ground rules. We need to ask ourselves some hard questions, and the first might be why we’re afraid of certain types of information in the first place.