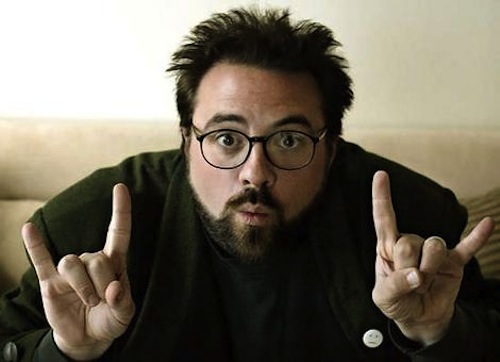 Why are you so similar to Haley Joel Osment? Dammit.

I loved Clerks and Mallrats when I was in high school, which makes thinking about Kevin Smith now particularly uncomfortable, like thinking about a bad ex-girlfriend. “How did I once love this person?” one asks, and the answer casts unsettling aspersions on the very notion of a self. It’s possible I’m overthinking this. My point is that Kevin Smith once seemed awesome and is now—for that reason and also because he made this and, Jesus, this—embarrassing. He is proof that anyone with enough gumption and perseverance can rise from obscurity to become a Hollywood hack, and that the things we love occasionally turn out to be, in retrospect, pretty awful—not that they remain wholly without merit. Also, I don’t know if you’ve heard this, but he’s really fat now.

Smith was removed from a Southwest Airlines flight last weekend because his size ostensibly posed a “safety risk” to other passengers. The director insists that he was able to sit comfortably between his armrests and buckle his seat belt, which is apparently the gold standard for flyability agreed upon by airlines and (presumably coerced) fat people. While Smith normally buys two tickets, he was flying standby on this flight and only one seat was available. Smith subsequently mounted a Twitter campaign that addressed the issue with the depth of consideration that is his signet—sample tweet: “So, @SouthwestAir, go f*** yourself. I broke no regulation, offered no “safety risk” (what, was I gonna roll on a fellow passenger?)”—and Southwest apologized. A mediastorm has since ensued, possibly because the story involves both Twitter and obesity and thus sets various newsbots immediately a-whirring, and possibly because Kevin Smith has a new movie coming out. It appears to suck.

With fat people and airline regulations comes the tricky issue of fat acceptance, which this blog has already explored in perhaps the most flippant and relationship-damaging way possible. Seriously, the thin man should keep his mouth shut about fat acceptance. To do so, however, is to turn the debate over to whomever has no such compunctions, and the rhetoric has already become impossibly degraded.

from Kate Harding at Salon. (Props to lifelong fat-reducer Ben Fowlkes for the link.) In addition to setting up an invidious comparison between airline policy and the historical oppression of black people—beginning with coining the phrase “flying while fat,” in parallel to the classic traffic offense, “driving while black”—Harding offers no actual solution to the problem, or even any acknowledgement that not-fat people are entitled to their entire seats. Instead, she employs what is known to TA’s across the nation as the Dead Mother Defense, inviting us—for several paragraphs—to consider the situation from the perspective of a fat person who is flying across the country to reach her dying mother. That was the problem faced by Harding and her equally large siblings, who had to fly in order to reach their mother’s bedside “within hours of getting the call that she’d had a massive heart attack.” Irony unnoticed.

The bulk of Harding’s argument consists of imagined remarks from the height-weight appropriate people sitting next to her imagined bereaved, who regard the indignity of sitting next to a fat person as “pure hell” and complain about the event “for the rest of their lives.” The dramatic irony is excruciating, as smug, petty slender people express their outrage over the weight problem of a person whose mother has just died, “that disgusting creature who just booked a single seat without a thought to the people who would have to brush up against her monstrous bulk for a couple of hours, like she had to be somewhere so important it was worth inconveniencing strangers.”

If I may be permitted to speak for the one third of the Snidely Whiplashes in America who are not medically overweight—and also not imagined in direct quotation by Kate Harding—this is not the problem we are talking about. If it were, we could all shut up about fat people on planes and the larger consequences of culturally institutional obesity right now. The problem is not that I find fat people so gross that I can’t stand to see them. Fat people are not gross, generally, and I grew up in Iowa so I am well accustomed to seeing them. The problem lies in that widely accepted tenet of western democracy articulated by John Stuart Mill, that your rights stop where mine begin. The airplane, cramped and horrible though it is, provides us with an unusually clean line between my rights and yours: the armrest. If you break the plane of the armrest, you are in my seat. For the same reason you would consider it rude if I sat down and immediately lay my head on your shoulder and went to sleep, I consider it rude if—for reasons glandular or otherwise—your body is in my seat. Is it easier for me to stay in my seat than for you to stay in yours? Yes, and that is probably unfair, in the same way it is unfair that you can confidently*

order at a restaurant, while I can’t get through the drink portion without getting nervous and making a joke about how I will die alone. We are each responsible for our own person, even though much of that person is arbitrary.

Let us put aside that Kevin Smith was not frantically trying to reach his dying mother on the other side of the country, but simply trying to get an earlier flight from Oakland to LA. Let us put aside the safety issue, which is hokum. If the plane crashes we are all going to be in an insanely unsafe situation, regardless of whether Kevin Smith can uncork himself from the aisle seat quickly enough for me to scramble out. The problem here is that your leg is touching my leg, and I do not like to be touched. In her indignation over the horrible injustice of what she imagines people to be saying about how fat she is—which she is totally okay with—Harding offers no solution to that problem. She does not suggest how airlines might make their seats larger to accommodate the growing number of obese Americans, or what system of compensation might ensure an equitable relationship between space allotment and fares, or how we might think about obesity in a way that acknowledges the problem without hurting obese people. Instead, she lambasts the people who can’t deal with her overflowing into their seats.

That is the one rhetorical tack that the person who is causing the problem is not allowed to pursue. For all her insight into my unspoken thoughts, Kate Harding seems unaware of any real discomfort she might be causing me. Whatever the problem at the heart of fat acceptance is, “too much empathy” does not describe it. I’m willing to talk about how American culture can be more accommodating of fat people. I think we should start by admitting that being fat is not quite like being black, and forcing me up against the window because you can’t close your legs is not quite like me finding you disgusting. I’m ready for fat acceptance, but it’s not because I’m ready to accept anything.