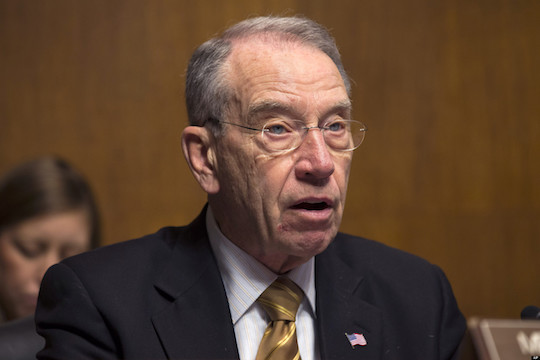 Elitists: they’re everywhere, according to people whose words and ideas are broadcast to millions. Obama was an elitist for saying every American should go to college. Donald Trump supporter Jeffrey Lord told CNN that fact-checking is elitist. Elitism seems concentrated in the journalistic class, particularly when politicians identify it. Just this morning, Senator Chuck Grassley (R–IA) posed this question to his Twitter followers:

Do u think 2day’s journalists r too elite for ‘ordinary Americans’?

You can tell Grassley is a man of the people because he uses chatspeak abbreviations. Journalists are too elite for him, an ordinary American who has served in the Senate for 30 years. But his tweet raises some questions.

Maybe the definition of “elitist” at work here is “anyone who doesn’t buy talk of elitism.” Elitism is a real thing. American society contains an increasingly powerful overclass whose privileges—education without debt peonage, influence without public service, and income without work—separate them from most Americans. The people who have made the word “elitist” so ubiquitous over the last few years are part of that overclass. They work every day to preserve their position. One way they do it is by encouraging the public—the “ordinary Americans” whom Grassley is concerned about—to mistrust the reporters who would tell them what the overclass is doing.

An elitist is someone who encourages ordinary Americans to embrace ignorance. He’s someone who believes that kind of cynical manipulation will work. Maybe he’s right. Maybe I’m the elitist for thinking that most people see through that kind of pandering. The 30 years Grassley has spent making law in Washington suggest that his understanding of how elitism-the-word works is more accurate than mine. But I like to imagine that his constituents in Iowa and his followers on Twitter read this tweet and thought of Grassley as the gutless bidder for one-way admiration he is.

Either you think elitism is a bullshit concept, or you’re an elitist. Once you imagine the general public is ill-served by a media that’s too clever for them—or believe you can advance yourself by saying it is—you’re participating in the elitism you decry. I’d be happy if I never heard the word “elitist” again. It is a lash wielded by those who think other people are stupid but want their support anyway.