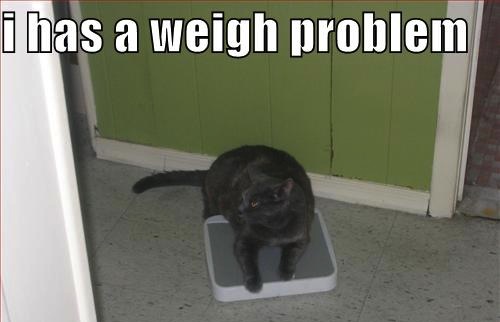 I will never get sick of you, lolcats.

We learn as children that “problem” is a relative term. Even a quick foray into epistemology suggests that we classify as problems only those conditions that fail our expectations; I don’t call it a “problem” that I continue to be unable to fly up into the air and shoot lasers out of my mouth, despite the certainty that learning to do so would improve my life, particularly when I’m in Target. But it’s not a problem because I never really thought I’d get it. This is why you always see footage of people smiling and dancing in Uzbekistan and whatnot: they are not aware that, from an empirical standpoint, they live on a big pile of shit. Here we arrive at a corollary to our first observation, which is that the problems of others are often astoundingly horrible compared to ours, yet paradoxically not very important. Basically, the problems of everybody down the Doing Okay Chain from us are mind-rendingingly abject, and those of everyone up the chain are risibly petty, but nothing in either direction is as big a deal as having to sit by the annoying lady at work. It’s Friday, empathy is asymptotically impossible, and the spectrum of problems is bizarre and alienating. Except right in the middle, where we are—that part is of dire urgency. Won’t you work your way toward it with me?

Let’s begin on the leftmost end of the problem spectrum, near “duck confit too lumpy” and “another woman on Supreme Court.” In a setback heartbreaking to probably six or seven guys, the Walt Disney Company has failed in its effort to trademark the name “Seal Team Six.” Props to Pete for the link. The people who delighted generations of children with Micky Mouse were planning to make an NCIS-style show about the people who de-sighted generations of Bin Ladens with teflon-jacketed small arms fire, but it turns out the Navy owns all that stuff. That’s a setback for Disney, whose initial petition for naming rights mentioned snow globes and a Christmas special. Basically, the special is a 42-minute shot of an empty room, followed by the distant sound of helicopter rotors, then a flash and by the time your eyes adjust there’s a fully decorated tree and two dudes behind you with egg nog and a goose, respectively.

Just down the spectrum from entertainment executives who habitually trademark historical actors are US Senators. They have recently run afoul of their opposite numbers, Protestant bishops, who on Wednesday sent an open letter complaining that the Paul Ryan budget put forth by the GOP “fails the basic tests of justice, compassion and a commitment to the common good.” Ouch. Remember how we always complain about the cognitive dissonance between the Republican commitment to Christianity and their other commitment to screwing the poor to the wall? Methodist, Episcopal and Lutheran bishops noticed that, too:

Unlike the Good Samaritan, who stopped to care for a wounded stranger on the side of the road, the House budget turns its back on the most vulnerable at a time of grave economic uncertainty even as it endorses policies that gives tax breaks for the privileged few.

That sounds like a real problem, doesn’t it? I mean, the gradual abandonment of a hundred-year national ideal in providing basic assurances of social safety signals a fundamental transition in—OH SHIT THERE’S A SECRET PATRIOT ACT. According to Senate Intelligence Committee member Ben Wyden (D–OR,) the federal government operates according to its own, notoriously broad interpretation of what the Patriot Act allows it to do—an interpretation it has formally classified. It’s one thing to make surveillance practices a state secret, Wyden says, but it’s another to make secret the reasons why those practices are okay. I’m sure that the secret reasons for whatever secret law enforcement activities the US government executes in the process of jailing people without formal charges while they await closed military trials are on the up-and-up, though.

You know what’s worse than secret police? Rickets. My brother sent me this fascinating article about an NGO selling healthy street food in Jakarta, which is a classic food desert. Food deserts are places where poor populations live without access to grocery stores or other sources of healthy ingredients, forcing them to rely on convenience store food or—in Jakarta, where thousands of people live without kitchens—street vendors. The food desert phenomenon is well-documented in America, but it reaches a new apex of bleakness in Jakarta, where 17% of children under five are acutely malnourished, and another 12% are overweight. Empty bread, empty mouths, as the man says. Those of you wondering if the traditions of the past are still adequate to the problems of the present may note that our poor people are fat now.

Not you, though—you are svelte and attractive, and simply by virtue of reading this on a computer you occupy a privileged 7% of the world’s population. That and other fun facts are contained in the Visual News feature If the World Were a Village of One Hundred People, which presents global statistics in pleasingly modern graphic form. My personal favorite is the food graph, although it’s almost cheating to make it a pie chart.

You know what’s better than grim facts about global inequality? Literalist visual metaphors for loss. I should hate this video, just like I should probably hate LCD Soundsystem, but I love them both: