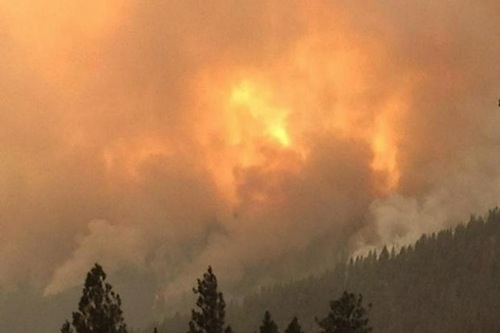 Smoke from the Sawtooth fire obscures the damn sun.

I am dogsitting my excellent nephew in the South Hills today, and the smoke is so thick I cannot see the mountains. Hell, I can’t see the grocery store at the bottom of the hill. The Sawtooth fire has covered Missoula in a rich musk, equal parts wood smoke and singed squirrel. In addition to creating some really excellent lighting effects and possibly damaging my lungs, the smoke creates an atmosphere of isolation. Even more than usual, the broad view is impossible. Today is Friday, and none of us can see too far in front of his own nose. Won’t you revel in subjectivity with me?

First, let’s take a moment to smugly consider what utter narrow douche-tubes are other people’s minds. A Public Policy Polling survey from last week found that Obama has a five-point lead in Ohio, but that’s not what’s interesting about it. What’s interesting is on page 15, where we get this fun cross-tabulation:

Fifteen goddamn percent of Republican respondents think Mitt Romney deserves more credit than the president for killing Osama Bin Laden, and nearly half of them aren’t sure. That’s some biased worldviewing right there, or possibly just more proof that people will say anything in response to polls. Even Peggy Noonan thought Romney’s Libya consulate comments were out of line, so there’s that, at least.

Meanwhile, respondents to an ABC poll say they would rather Obama take care of them if they were sick. If that’s not a useful barometer for calibrating our democracy, I don’t know what is—unless it’s Obama’s 19-point lead over Romney in the question of whom you would invite to dinner. Maybe I’m weird, but I do not think the man who makes the best drinking buddy necessarily makes the best president. I would like to have a beer with Romney, though, just to make him choke it down. Hello Miller High Life, goodbye Mormon heaven.

That may sound harsh to you, but don’t forget that I’m a follower of this man. The Onion is possibly the last preserve of actually funny satire on Earth. Where other quote-unquote humor outlets insist that jokes announce themselves to the dumbest possible reader, the boys from Madison just deliver the high, pure noise. The best part is that stories like this still get mistaken for real news. Maybe the difference between satire and mere sarcasm is the one person somewhere who believes it.

Here’s a fact that should be satire but isn’t: in US states, the person in charge of elections is a member of one or another political party. On a totally unrelated note, Ohio’s Republican secretary of state, Jon Husted, has been ordered to appear in court for his refusal to restore early voting the weekend before the 2012 election. You know who votes early the weekend before the election? Old people, students, single parents with jobs and other people who absolutely cannot get to the polls on a Tuesday during work hours. Those people tend to vote Democrat. Husted said it would be premature to set the court-ordered voting hours now, because he has appealed the judge’s ruling:

The constitutionality of the statute setting in-person absentee voting hours is still subject to court review and it would further confuse voters to set hours now that the court may change later,” Husted said in his directive.

It’s nice to see a state-level politician with enough confidence in his own interpretation of the Constitution to set it on par with that of the actual courts. Please, Republican party, do to the word “constitutional” what you did to “freedom.”

Are you reading Fightlinker yet? If you aren’t, you missed my list of ways Stephan Bonnar might not lose to Anderson Silva at UFC 153. Say what you will about our present injury-plagued season of MMA; we are in a golden age of crazy betting lines. You see a bout between the most dominant champion in UFC history and Some Dude. I see an opportunity to make $750. Or one of those insult matches where Silva dances for two minutes and then breaks his opponent’s jaw—either would be fun.