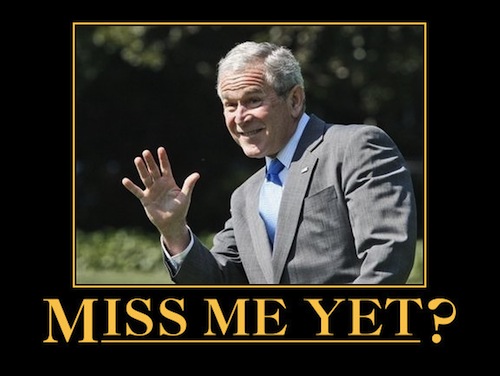 It’s Friday, and that means it’s time to look back on that which is about to become the week that was. Peculiarly, it’s been a week of nostalgia for the man pictured above. You might remember him from such bold leadership initiatives as turning a budget surplus into a multitrillion-dollar debt, deregulating the financial industry, awarding no-bid contracts to corporate cronies in two wars whose duration currently exceeds that of World War II, and arguing passionately in favor of torture. Or you might just remember that he talked like you and wasn’t black. It all depends on your perspective, and for a president who left office with a 38% approval rating, George W. Bush has enjoyed a surprising resurgence lately. It’s almost as if the good people of America articulated their political thoughts entirely in terms of being against things, and/or had no recollection of events beyond the past year. Of course, it’s also possible that the whole thing is made up; you probably also remember the national media that told us the war in Iraq was going to be quick and easy, then told us that no one could have predicted the problems in Iraq, then pilloried the Bush administration for messing up Iraq before alleging that Obama’s presidency is foundering on his inadequate commitment to same. It’s all a rich tapestry, which has fallen from the wall into a pile of rat feces, and we serfs can only peer upward and try to deduce the movements of the heavens using our astrolabes or whatever. It’s throwback time. Won’t you shudder in ignorant terror with me? 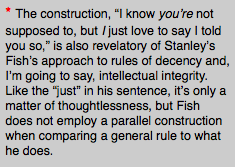 In 2008, he predicted that George W. Bush would be the object of nostalgia within a year after leaving office, and now, Fish crows, he is totally right! His evidence is a billboard in Minnesota featuring the picture above, and the cover of this week’s Newsweek, which declares “Victory at Last” in Iraq. Fish calls the magazine’s assessment that democracy is emerging in that country as “eerily echoing Bush’s words in 2003,” as if that somehow vindicated him for goading the country into the least successful war since Vietnam. It’s a little like saying that George Foreman was right to predict that he would knock out Muhammad Ali because the man got Parkinson’s thirty years later, but Fish covers his bases. “Of course,” he writes, “one might disagree with that assessment, but the fact that it is made in the lead article of a major mainstream magazine tells its own story.” I dare you to pinpoint exactly what that sentence means in fewer than ten readings.

Fish would be George Bush’s most reprehensible booster, were it not for the entire Cheney family. If you have access to any consumer electronics devices whatsoever, you’ve probably heard about Liz Cheney’s vilification of justice department lawyers who represented Guantanamo detainees, and the disappointingly gentle backlash that follows. This is America, and you don’t defend the foreign nationals we jail and torture indefinitely without hearing about it from the daughter of our millionaire former vice president. If you think the word “torture” is a little hysterical in that sentence, you should read this. Props to Ben al-Fowlkes for the link. The article details the grotesque lengths the CIA went to in order to ensure that prisoners were waterboarded as efficiently as possible, including on-site doctors, liquid diets to reduce the risk that subjects would choke to death when they vomited, and procedures to prevent detainees from deliberately inhaling water in an attempt to die. Here’s how you know what you’re doing is torture: while you’re doing it, you have to actively prevent the person you’re doing it to from trying to die. If you get invited to the Cheneys’ house this Christmas, and you’re playing charades, be sure not to pick “Nuremberg” or Liz will cry.

The Bush legacy isn’t all land wars in Asia and secret torture chambers, though. The man also had a domestic agenda, and whether he meant it to work this way or not, his starve-the-beast approach to reducing the size of the welfare state is coming to pass in Kansas City. In response to a projected $50 million budget shortfall, the city has decided to close nearly half its public schools. Let’s just say, for the sake of argument, that you are an ultra-conservative product of several private academies who believes the government has no business funding public education. You could never convince the people of Missouri to close half the schools in Kansas City for ideological reasons, but if there were a massive budget crisis—one provoked by, say, a massive economic collapse resulting from your laissez-faire approach to the financial sector—they’d pretty much be forced to. In another twenty-five years, “Kansas City halves public schools” will just be how they talk down there.*

You don’t just save yourself $50 million doing that; you also save yourself a constituency that has any recollection of American history. The Virginia General Assembly has passed a bill making it illegal for the federal government to require anyone to purchase health insurance, apparently in ignorance of the prohibition against nullification and the civil war we fought to establish it. States can’t just make laws saying they’re going to ignore the federal government, even if those states are Virginia. The the General Assembly is willing to flaunt an established judicial precedent—one that is so well known as to be an easily predicted question on high school history tests—in order to refuse a law that hasn’t even been passed yet suggests that this bill might have some political content. I suppose a war to preserve slavery only seems stupid when you don’t consider the possibility of a war to prevent health care subsidies.

Then again, what is the law anyway, besides a collection of rules we all agreed upon for our own protection and mutual benefit? Virginia isn’t the only place where defiance is both stupid and kind of romantic. Consider the case of Haisong Jiang, the Chinese graduate student who ducked under a rope in Newark airport so that he could kiss his girlfriend goodbye at her departure gate. Jiang’s slip through security caused a six-hour shutdown of the airport and a five-day manhunt to apprehend him—not that he was aware of either, having left the airport and driven home after his girlfriend got on the plane. How much money are we spending on the TSA, again? And how many schools did we close in Kansas City this week? I like two kinds of criminals, and Jiang is one of them. The other is represented by the so-called Rico Suave thief, a sophisticated cat burglar who has used his upper-crust appearance to burglarize a series of ritzy hotels in the Los Angeles area. Rico Suave struck again during the Oscars, when he walked into the Four Seasons in Beverly Hills and made off with $45,000 in jewelry. I’m not saying that former president George W. Bush is the Rico Suave thief, but he is a wealthy man who can easily gain entry into the country’s most exclusive hotels. On the other hand, he is probably more likely to steal beer. In any case, I hope that when they catch him they waterboard the shit out of him. The jewel thief, too.