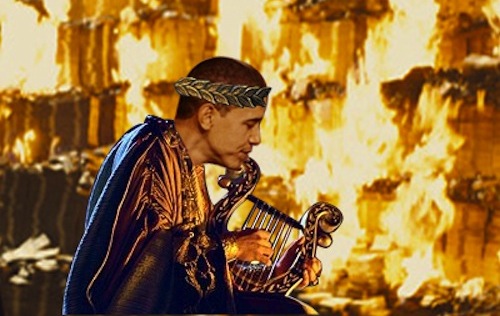 As hyperpartisan Photoshops go, this one is surprisingly well done. Maybe I'm just thrilled he's not wearing a turban.

We all who are not Russian spambots know the old expression about Nero fiddling while Rome burns. Clearly it is a durable metaphor, since it survived as a commonplace when much of the rest of western culture—including such minor elements as engineering and physiology—was lost with the fall of the Empire. Yet the fiddle was not invented until a millennium after the Great Fire, as any smug prick will tell you. This sketches an interesting narrative: the image “Nero sings while Rome burns” or “Nero plays the lyre while Rome burns” had to reproduce as a viable meme for a thousand years, only to mutate into the much more viable strain “Nero fiddles while Rome burns” upon the invention of the violin—or, more likely, upon the convergence of the terms “fiddle” to play the violin and “fiddle” to screw around. Besides presenting a rad instance of ideational evolution, this progression is a testament to the power of human beings to envision collapse in their own time. Because today is the last thing that ever happened, present times invariably seem like end times. I’m sure Nero remarked on the phenomenon often.

You know who else is possibly crazy and concerned about the trajectory of his nation? Not me, dammit—Bill Cosby. Here he is in the beautifully-headlined “Bill Cosby Slams Trump, Stuns Meredith Vieira Into Silence” doing those two things. What is most striking about this video is not the Cos blurting out “I don’t care!” after Vieira’s out. It’s that the man who once plotted a 22-minute sitcom episode around his self-destructive desire to eat a sandwich is the only prominent member of the American media complex to point out that Donald Trump is not a legitimate presidential candidate. Seriously, the office of President is an actual thing. Donald Trump is not. Also, Bill Cosby’s mannerisms and facial expressions increasingly resemble those of my grandfather, irascible but hypercompetent black man Cliff Hux—oh my god.

Speaking of hypercompetent black men who cause us to interrupt ourselves mid-sentence, Barack Obama has been a much better president than Geo—fucking military tribunal of Khalid Sheikh Mohammed? Really? I’m glad I’m not an accused terrorist, although the ongoing combination of far-reaching investigations, indefinite/uncharged detentions and secret trials means that I could become one and disappear at any time. Perhaps I will see you in Cuba. As Glenn Greenwald points out, the Obama administration’s decision to not only keep Guantanamo Bay open but also to try KSM via some sort of Russian bunker ritual is A) a naked capitulation to Republican fearmongering and B) another sellout of the Democratic base. But what are they/you/we gonna do, vote for Newt Gingrich? The difference between the Republican and Democratic parties is that the GOP panders to its base, while the Dems take them for granted. Follow-up question: which party is more politically effective?

Here’s another difference between the parties: the Democrats get a ton more money from large donors. That bit of counterintuitive fact is brought to us by OpenSecrets via Smick, which would also be a good name for a late-night softcore show on Cinemax. Even a cursory look at the list will tell you why Republicans hate unions so much. It will also tell you something about each party’s constituents. Republicans get much more money from individual donors—that is, individual rich people—than Democrats, as seen in the $29 million the latter got from the Carpenters and Joiners Union over the last 20 years. Individual carpenters and joiners are not big donors, one suspects. It’s almost as if a union were a unit of not just economic but social organization, allowing people who would be shut out of the political process on their own to collectively—oh wait, they’re dead.

I’ve thought about it for several minutes now, and there is no transition from the socio-historical importance of unions to the news that Rick James is leading a class action suit against record labels on behalf of artists underpaid for digital sales of their music. It’s so wonderful that it’s Rick James, though—especially when you imagine him wearing a suit and holding a briefcase. It turns out that older recording contracts awarded much higher royalty payments for licenses of music than for sales—that is, for stuff like commercials and soundtracks, as opposed to CDs and cassettes. James et al point out in their suit that digital distribution media like iTunes much more closely resemble licenses than sales, and that the discrepancy between the two royalty rates means that record companies maybe owe their artists two and a half billion dollars. Labels, of course, say iTunes is sales—even as they simultaneously argue that digital music files are sold as licenses in their ongoing peer-to-peer sharing lawsuits. I cannot wait until the owners of EMI are competing for handjob clients with former newspaper editors in Penn Station.

Don’t worry, though: rock and roll is forever. Why, just look at Iggy Pop, who at age 62 is writhing around with his shirt off and yelping about how he is a Real Wild Child in front of millions of his fellow senior citizens, one of whom is Steven Tyler. American Idol is pretty much a machine for demonstrating that rock and roll is no longer a type of rebellion, but it may have reached a new level of efficiency with this one. If this video somehow does not provide you with that last bit of incentive you need to genuinely give up on life, I encourage you to read the comments. If I may quote Thrashpunkfiend: “What a Joke how the younger generation talks shit about Iggy,they don’t know shit about REAL rock n’ roll or REAL PUNK ROCK.NONE of﻿ the bands today will last 40+years and be in the ROCK N” ROLL HALL OF FAME.” Nothing could be more real punk rock than the Rock n’ Roll Hall of Fame. I have to go cut myself and listen to Choking Victim now, but I’m going to make it feel good by watching this video one more time: