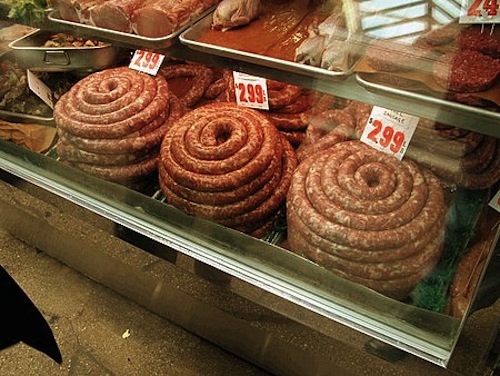 As David Hume reminds us, what often appear to be fundamental connections joining the elements of experience—causality, the consistent self, the unity of objects—prove little more than illusions when we examine them closely. Sure, we like to think that the component parts of our culture cohere into a sensible whole. The nomination of Elena Kagan seems to say something about the tension between a youthful, tolerant United States and an old, angry America, just as the laxity of our federal regulators appears vaguely connected to the popular belief in an omnipotent supervisory force that abides in space, but who knows if that’s really true? When you get right down to it, our most urgent attempts at sense-making amount to, as Emily Dickinson put it, “a bunch of bullshit.” It’s Friday, it’s 73 degrees and sunny in Montana, and Combat! blog has embraced nihilism. Sure, I could tie together this week’s links into some sort of totalizing theory, as I am generally wont to do, but that would rob you of half the fun. Like an undiagnosed schizophrenic alone in his studio apartment filed with pictures of Kennedy, painstakingly circling the first letter of each sentence in the New York Post, it’s more fun when we figure it out for ourselves. This week, Combat! blog presents a bunch of stuff that happened. Something is going to happen tomorrow, and we don’t know what.

First, bad news for those of us who would like to blame all our problems on the incompetence of the previous administration. In fact, bad news for everybody—last year, the Minerals Management Service allowed dozens of oil companies to drill in the Gulf of Mexico without environmental permits. The National Oceanic and Atmospheric Association, which oversees the preservation of endangered species, had little say in the over 400 Gulf extraction projects that were allowed to proceed in 2009 without obtaining permits required by federal law. “MMS has given up any pretense of regulating the offshore oil industry,” said Kierán Suckling, director of the Center for Biological Diversity. Not our precious pretense! That’s the very foundation on which the separation between corporate interests and the US government is based! Maybe somebody thought there was oil under there.

Clearly, something is wrong with the way this country is run, when even the federal government loses interest in federal law. Don’t worry, though, because Meghan McCain knows what it is. Are you ready? It’s partisan politics. I can only assume that we have moved into late-period Me-Mac at this point, since her columns are getting shorter, vaguer and increasingly dependent on personal anecdote. Her most recent finds her shopping with her millionaire mother in Arizona, where she is accosted by an unidentified man who demands that her father the senator be more conservative. I’ll say this for Meghan McCain: she’s not playing the everyman card. She’s also not correctly playing the quote card. After six hundred words decrying the partisan rancor of contemporary politics, she drops the following: “As Elie Wiesel once famously said, ‘The opposite of love is not hate. It’s indifference.'” Your guess is as good as mine why she felt that was relevant, although I should say that my guess is “quote website.”

I’m going to say that Me-Mac’s column constitutes the third worst idea for anything that anyone has had this week, just after my plan to use a series of lesbian jokes to introduce a politico-generational theory about the demographics of homophobia. The title of Worst Idea has to go to The Human Centipede, reviewed here in The Onion AV Club. The premise of this horror film, which is A) gross and involves B) a mad scientist and C) sewing, seems to suggest that we have reached some sort of transcendental state of unpleasant entertainment. Forget torture porn; we’re into regular torture now, and it costs eleven bucks to undergo it. I am not a horror aficionado, so it’s possible I don’t understand the conceptual delicacy inherent in the gross-out film. Micky, please tell us if this movie is cool or a terrifying symptom of society in decay or what.

The good news is that there’s still decency in society, and its creative impulse is just as strong as that of the shock artists. We can create narratives in our lives as felicitously as we can make them on screens, and that’s why I’m giving my life savings to Steven Baldwin:

He’s a symbol, and in these dislocated times, we need a symbol to unite us. That that symbol happens to be one of the guys from The Usual Suspects is just gravy.