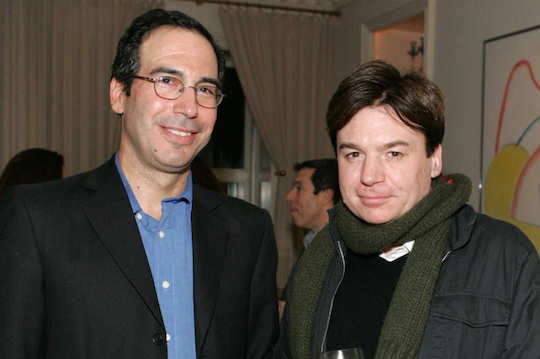 The 2016 election was about resentment toward economic and political elites. That’s why voters (nearly) picked the billionaire TV personality instead of the hundred-millionaire president’s wife. Now that the electorate has demanded Washington stop rigging the system in favor of rich people and their execrable children, Donald Trump is here to clean things up, along with his children. But he’s also got a posse of rich men. Here’s notorious bro Bernie Sanders with a fun fact:

If you really wanted to make America great again, you could nominate these 17 people to give up their fortunes and double the assets of the working class. How many people would not give one rat’s ass what Rex Tillerson did after he did that? You could give him room and board in the White House and let him live on his salary as Secretary of State. But that would be crazy—better to let him keep his money and also give him global power. Today is Friday, and the CEO of ExxonMobil is going to help a TV billionaire make things right for the little guy. Won’t you strike up The Internationale with me?

The good news is no one actually likes billionaires. The bad news is that both parties are convinced we do. Over at The Baffler, Alex Cuadros notes that the Democrats’ plan to stop Trump involved lining up their own billionaires to endorse Hillary Clinton. In America, money is authority—not just financial and political authority, but moral authority as well. We all know rich people are rich because they’re smart and hard-working. Here’s another fun fact: “If [Trump] had put his inheritance into a mutual fund,” Cuadros writes, “he would have earned more from plain old compound interest than he did with his investments in real estate.” That’s what I’ve been saying all along to my empty apartment. It doesn’t take a genius to make a billion dollars in the New York real estate market between the 1980s and the 2010s—when property values skyrocketed throughout the metropolitan area—especially if you start with a million or so and a real estate developer dad. Being rich doesn’t necessarily make you smart or venal. But which one do you think it made Trump?

Meanwhile, among people who had previously been content to damage only our culture and not our government, Trump’s pick for Treasury Secretary has an embarrassing past. Yes, he was a banker at Goldman Sachs—whom Trump railed against Hillary Clinton for addressing—but you probably knew that. What you may not know is that he produced Suicide Squad, the movie that distills all the most poisonous ingredients in our national stew of nostalgia, special effects, and cool violence. I can forgive Mnuchin for potentially selling his clients on investments he knew were toxic. I cannot forgive him for this:

Kudos for making contemporary American filmmaking more efficient by figuring out a way to sexualize both childishness and murder at the same time. Mnuchin was one of many producers on Suicide Squad, and he probably had little creative control over the film. But Jesus Christ, man. Maybe fund a Noah Baumbach movie or something.

But wait—is Suicide Squad really the billionaire producers’ fault? Doesn’t at least some of the blame lie with the ordinary people who put on their nice sweatpants and lined up to see it? These are the people coarsening society generally, and not just at the movies. They also exercise undo influence at the mall. The Mall of America hired a black Santa this year, and “online racists are having a meltdown,” according to Raw Story. The story, which is totally raw, turns out to be screenshots of Facebook and Twitter users saying racist shit. None of them is a public figure or has more than 1,500 followers, but RS aggregated them into a story that got 185,000 Facebook shares. That is egg-manning on an industrial scale. Courtesy of the internet, “look at these obscure bigots” has become a genre of reporting unto itself.

This is not to say that bigotry is uncommon, or that the common man is not, left to his own devices, a gaping asshole. Uncommon man Attempt sent me these two letters to the editor of the LA Times, which argue that contemporary media coverage of Japanese internment during World War II has been insufficiently balanced:

I see that writer Carolina A. Miranda has attached herself to the “I feel-good” contingent that feels sorry for the Japanese here in World War II [“ ‘Relevant’ Journey,” Nov. 27]. But this is just another anti-U.S. remake of history…Japanese have an extremely strong attachment to family, and even more so back then. First- generation and, to a lesser extent, Japanese here would have been expected to follow the wishes of their elders in Japan. Some, most or almost all might have refused, but the threat was there.

God, I’m sick of the weird attachment Japanese people have to their families. This message from a representative of the I Feel Bad contingent probably doesn’t reflect broad sentiment. But if you don’t see imprisoning American citizens on the basis of race as bad even though the lens of 60 years, what are you against? Oh, right—everyone who isn’t white. I’m really trying to preserve my enthusiasm for democracy, here, but sometimes I wish I could wander through the electorate with a long, curved sword.