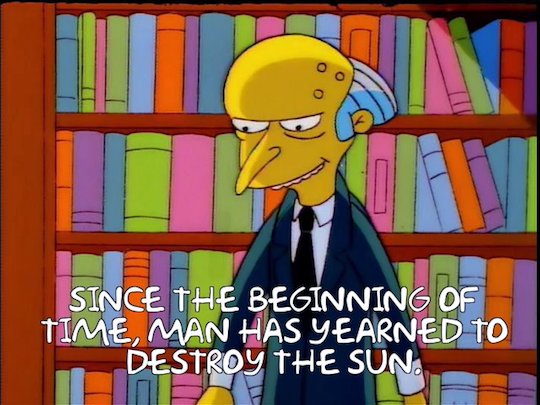 I’ve been thinking about this joke for 20 years, and it’s the word “yearned.”

Let’s say you run a state regulatory agency tasked with setting rates and contracts for utility companies, such as the Montana Public Service Commission. Let us also say part of your mandate is to promote renewable energy. This isn’t just your general sense of what the public wants you do to; it’s federal law, mandated by the Public Utility Regulatory Policies Act of 1978. Anyway, let’s say that despite this mandate, you secretly plan to use your regulatory power to increase profits for established utility companies and keep stuff like solar power out of the market. People have accused you of pursing this agenda before, but you denied it. Then, a hot mic accidentally records you talking about how to set rates so low it puts solar farms out of business.

You cannot go ahead and do it, right? You got caught planning to do something deeply unethical and federally illegal, and the only thing to do now is abort the plan. You certainly cannot set rates for solar farms so far below market that they cease to be viable businesses. People are on to you. And yet Commissioner Bob Lake did exactly that. In June, a hot mic caught him talking to rate analyst Neil Templeton about the threat of solar power. Templeton opines that “just dropping the rate probably took care of the whole thing.” Lake replies, “Well, the 10-year might do it if the price doesn’t. And at this low price, I can’t imagine anyone getting into it.”

That’s it! You made a recording of your criminal conspiracy, and now it is over. Yet somehow, last month, the PSC set the rates for the proposed MTSUN solar farm outside Billings at $20 per megawatt-hour over a ten-year contract. Compare to the residential supply rate the commission set for NorthWestern Energy: $62 per megawatt-hour over the next 25 years. MTSUN developer Mark Klein confirmed that his solar project would be unworkable under those terms.

I applaud this bold act of regulatory capture and welcome the PSC to our long war against the sun. My only concern is that it will come up again somehow. Still, I praise Lake and his colleagues for sheer brazenness. Montana ratepayers could have no stauncher ally in the fight against cheap electricity from dubious sources. You can read all about it in this week’s column for the Missoula Independent. We’ll be back tomorrow with Friday links!