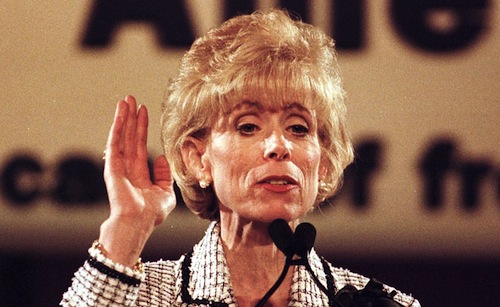 Pretty much every picture of her is funny if you imagine her saying it.

The short answer to the question posed above, as Dr. Laura Schlessinger demonstrated last week, is “Not eleven times on your nationally syndicated radio show.” If you haven’t heard the clip, I invite you to check it out, if only for the theoretical demonstration of what an n-word valve breaking would sound like. Like Michael Richards before her, Dr. Laura gets started and she just can’t stop.

She apologized on her website yesterday, and she seems to consider the views articulated in that clip genuinely wrong. They’re still worth considering, though, since they provide a particularly clear distillation of how we approach racism in a culture that seems paradoxically to be A) no longer overtly racist and B) lately more racist in covert ways.

Item (A) is, from a historical perspective, pretty inarguable. We all eat at the same lunch counter now and the remake of Guess Who’s Coming to Dinner was a comedy.* It was also a comedy about a white person**

who must overcome black racism—an inversion that captures an idea increasingly popular in commentary and sentiment, namely that racism is something white people now fully understand.

Nowhere is this phenomenon more evident than in our ambition to acceptably use the n-word. The initially fishy argument that rappers, comedians and other black participants in popular culture were reclaiming the epithet by using it like a comma has proven completely true, and the proof is that white people now envy them. Today, for example, I would like my Facebook status to be “I’m not saying you owe me, [n-word] / but act like you know me, [n-word.]”  But that is not allowed—even doing it with the brackets is a little uncool—because I am not black.

That initially seems unfair, until you consider that I have essentially traded my n-word privileges for the ability to hail a cab, get a small business loan and not have a national organization of hooded illiterates dedicated to hanging me from a tree. This is the perspective that Dr. Laura failed to consider.

Her complaint that “if anybody without enough melanin says it, it’s a horrible thing. But when black people say it, it’s affectionate. It’s very confusing,” appears legitimate at first, but it fails to take into account that the country is still 66% white and 12% black. The n-word is an extremely compact reminder of this statistic, conveying solidarity when Wanda Sykes says it to Terrell Owens and vague threat when Dr. Laura says it to, um, every black person listening to her on the radio. It’s a reminder of who still runs the show.

That’s probably why people who would prefer to deny the persistence of American racism don’t like it. Later in the show, Dr. Laura said she was surprised that people still considered racism a problem after we elected a black President. The argument seems to be, now that everyone can sit where they want on the bus and half-white Harvard graduates with phenomenal public speaking ability can occupy the Oval Office with only minimal suspicion that they are secret Muslim Africans, that we all get treated equally. So shouldn’t we be equally allowed to use race-specific epithets?

The answer to that question is, of course, [n-word] please. The persistent outrage among caucasians over perhaps the one privilege exclusively granted to black Americans—be it expressed in Westchester County’s attempt to ban the n-word or in Dr. Laura’s attempt to reclaim it yet again for old rich white ladies—itself constitutes proof that power is not distributed equally. When it is, the n-word will probably stop being a cool thing to say.

Until then, we are left with the question of when it is acceptable to use it. Joe Rogan suggests that it is okay in two circumstances: (1) if you yourself are black or (2) if you are absolutely sure that there are no black people around. This is the practical argument, and Dr. Laura could have saved herself a lot of trouble if she had simply accepted that it is unwise for a white woman to say the n-word a dozen times in rapid succession, regardless of whether that’s a cosmic injustice.

For those of us who are always inadvertently offending people anyway and are therefore free to concern ourselves with a more theoretical ethics, the answer is a little more complex. Yes, non-racist white people should theoretically be allowed to say the n-word in affection or mock-indignation, just like Dave Chappelle. And yes, the nature of self-nomination is sufficiently deceptive that our desire to say it might disqualify us from the title of Non-Racist White Person. With that in mind, I propose the following criteria for when it is okay to say the n-word:

2) Dr. Dre is saying it at exactly the same time as you.