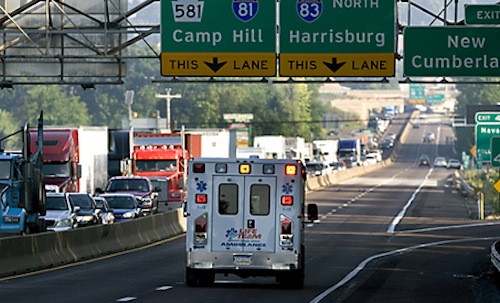 Harrisburg is a city famous for two things: it’s not the one chocolate comes from, and now it’s the one steel doesn’t come from, either. The 50,000-person capital of Pennsylvania used to be a center of making stuff, but it has since drifted into the vague purposelessness of post-industrial America. Harrisburg is one of many medium-sized American towns with no particular reason to exist: too small to be an urban center, too big to be quaint/farmy, it is a city because a bunch of people live there. It is also in fiscal crisis. Back in 2003, Harrisburg borrowed $125 million to repair a garbage incinerator. That project was delayed, but the city spent the money anyway, only to borrow millions more later because, oh shit, the garbage incinerator. Now the government of Harrisburg has $310 million in guaranteed debt, and a state-appointed panel has determined that it needs to cover that by selling its city parking system. Also their garbage incinerator, which is a real kick in the pants.

No one thinks selling the parking system is actually a good idea. Chicago entered into a similar, famously bad deal a few years ago, which quadrupled rates—parking is now $3.50 an hour on the Loop—and lowballed the value of city meter revenue by an estimated $1 billion. In 2008, Harrisburg looked at a comparable arrangement with the New York developer Lambda Star: $215 million for a 75-year lease of city parking garages and meters, or $195 million for 50 years. Lambda would keep the revenue and retain the option to double rates twice every year. Neither the deal nor general opinion of its rapaciousness has changed much since then, but the city fathers are under increasing pressure from the state to take it.

In case you’re wondering: a meter rate of 25 cents an hour, doubled twice annually, would become $65,536 an hour by 2020. That outcome seems unlikely, but it gives you some sense of how $195 million for Harrisburg’s 1200+ parking meters is a sweetheart deal. Over a 50-year period, the meters and garages of Harrisburg would almost certainly take in more than $200 million, but the city needs that money now. And from the standpoint of electoral politics, “privatize the parking authority” is a much, much easier sell than “raise $200 million in taxes.”

This is how representative democracy breaks down. Indulge me in some napkin math: with 50,000 residents, the City of Harrisburg could cover the $200 million offered in the Lambda deal with $4,000 tax revenue from each resident. That is one hell of a cover charge to live in Pennsylvania, but over 50 years it comes out to $80 per resident per year. Even if we assume that only a quarter of the city pays taxes, we’re still asking them for less than a dollar a day. Again, that’s a heavy burden for a city to place on its residents, philosophically if not financially. But considering that the cheapest meters in Harrisburg currently charge $1 per hour—and that Lambda could legally make them charge $16 an hour by Christmas 2012—a buck a day doesn’t seem so bad.

That’s a false comparison, of course. The Lambda deal is offering near $200 million right now, which happens to be when the city needs it. Asking the H-Burgers for $4,000 apiece right now would probably not go over well. With the right advertisement, you could probably make asking them for $400 a year for the next ten years not go over well, either. Yet the people of Harrisburg are likely to spend a lot more than that on increased parking rates if the Lambda deal goes through. They’ll just be paying it a quarter at a time into metal sticks, rather than $400 at a time into envelopes addressed to the government.

It seems we have hit on a perfect system for making people spend more money than they need to. No elected official has much incentive to step up and save the voters of Harrisburg a few hundred million dollars; to do so, he’d have to run on “you give the government $4,000” instead of “we sell the parking meters.” I’m no political strategist, but that seems like it would be tricky. Even those residents who have the wisdom to do their own math or the good looks to read this blog would have to go through the difficult psychological experience of voting themselves a tax increase. And so a big, vague expense triumphs over a smaller, specific one.

Students of liberal democracies will here recognize the species’s greatest weakness. As our current twin manias for reducing the federal deficit and cutting taxes suggest, electoral politics makes it virtually impossible to get people to make a short-term sacrifice for a long-term advantage. You can do it, but you need people who are motivated to unusual nobility: the Depression generation at America’s entry into World War II, the pioneers on the Oregon Trail, the tavern-goers of Boston in 1776. Such citizens are hard to find, as anyone who has tried to fix a trash incinerator will tell you. In the meantime, we can always sell now and pay later.