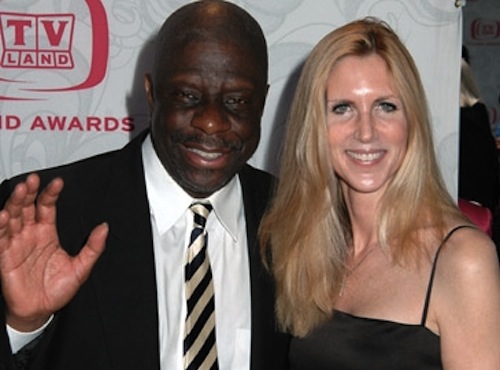 According to Ben Smith at Politico, conservative website WorldNetDaily has dropped Ann Coulter from its Taking America Back National Conference, out of indignation at her decision to speak at the September convention of gay conservative group GOProud. You should probably know that this event is called Homocon. That and the poster’s insightful assessment of Coulter as “the conservative Judy Garland” suggest that we have finally found the fun wing of the Republican Party, but WND refuses to be amused. As founder Joseph Farrah put it:

Ultimately, as a matter of principle, it would not make sense for us to have Ann speak to a conference about “taking America back” when she clearly does not recognize that the ideals to be espoused there simply do not include the radical and very un-conservative agenda represented by GOProud. The drift of the conservative movement to a brand of materialistic libertarianism is one of the main reasons we planned this conference from the beginning.

All right, but you’re not going to be getting any mimosas. Farrah’s comment is the closest we’ve come in a long time to a direct examination of what it might mean to “take back America”—a phrase that has been falling out of mouths and into microphones with increasing frequency. Somewhere in Farrah’s tangle of adverbs and implications is a clear statement about what “taking America back” means. And when something like that happens, you know that for which it is time: another Close Reading!

As the subjects of Close Readings go, Farrah’s prose is remarkably clean. His interest in using intensifiers like “clearly” and “simply” on statements that are neither clear nor simple is annoying, but it’s nothing beyond the pale of freshman composition class. Out of habit or design, he frames WND’s position in terms not of moral choice but rhetorical consistency. “Ultimately, as a matter of principle, it would not make sense” to let Coulter speak, which makes the whole thing sound like a technical marketing problem.

It’s on odd position for WND, which seems not generally concerned with rigorous intellectual honesty—as this article suggesting that terrorists used the threat of nuclear attack to get Mike Bloomberg to support the Ground Zero Mosque indicates. Like most people who make the subject of their sentence “it” and the predicate “would make sense that,” Farrah is weaseling. The real problem, obviously, is that GOProud and their Homocon are gay.

Actually saying that would present Farrah and WND with a problem, since it forces them to public choose “anti-gay” over “pro-conservative” as their defining position. You’d think that WND would want to win a little sanity cred by embracing a group like GOProud, or at least not publicly ostracizing anyone who’s had anything to do with them, but apparently they just genuinely hate gay people.

That their prejudice trumps their politics is evident in Farrah’s assessment that the conservative movement has drifted toward “a brand of materialistic libertarianism.” That’s A) canny and B) a euphemism for talking too much about taxes and too little about not letting dudes hold hands. Farrah is arguing for social conservatism—in a subsequent exchange with Coulter, he accuses her of “legitimizing…the idea that sodomy is just an alternate lifestyle”—and he opposes that to “the ideals to be espoused” and a “conference about ‘taking America back.'”

Aha—it’s the worm that holds together the apple. It turns out that “taking America back” does not mean taking it back for political conservatism. If it did, Coulter’s association with GOProud would be no problem, since both are just to the right of Mussolini. Instead, Farrah and WND are looking to “take America back” for some group of people who are as yet undefined. What is defined is whom they’ll be taking it back from: gay dudes, in this case, and probably immigrants and Muslims and half-black Presidents while we’re at it.

Farrah’s use of “taking America back” is just one person’s assessment of what that means, but it’s the most direct confirmation yet of the phrase’s exclusionary overtones. Coupled with WND’s birther obsession—or with Sarah Palin’s continued allusions to “real Americans”—it becomes a negative entity. Who gets to take it back is an undefined Us, and whom it must be taken away from is an Other.

This reading of the phrase explains why it is so popular with the idea-free Tea Party, and with a WND that is in this case prioritizing its hatred for gays over its interest in conservatism. Political ideology—what we should do with America once we have it—is less important than making sure certain people don’t get ahold of it. We’ve said a lot of negative things about Ann Coulter—she’ll say anything for money, she makes up facts on television, her vagina attracts sea birds—but she’s admirable next to Joseph Farrah. At least her political speech is about politics.