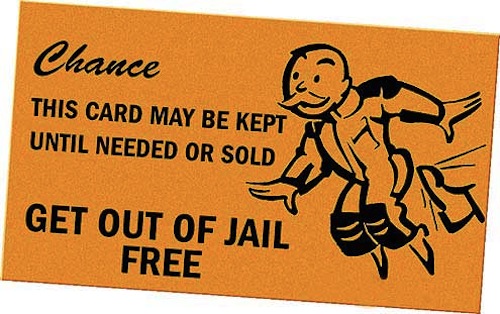 A card from "Oligopoly," the board game which I personally invented with no outside input whatsoever

A Colorado district attorney has dropped felony charges against Martin Joel Erzinger, the money manager for Morgan Stanley Smith Barney who allegedly fled the scene after striking a bicyclist with his Mercedes in July. Props to Pete “Bones” Jones for the link. Also, for expedience, the reader should add “allegedly” to virtually every sentence in today’s blog post. I’m going to skip it from here on out, but I don’t want the alleged Erzinger’s lawyers to use their allegedly bottomless sack of money and influence to sue me for alleged slander—which they could easily do, since Erzinger is allegedly a law unto himself. Eagle County prosecutors essentially admitted as much when they explained that they had reduced charges so as not to jeopardize Erzinger’s ability to make even more money. As a securities dealer, he would be required by NASD regulations to reveal any felony conviction to his clients, and that simply would not do. “Felony convictions have some pretty serious job implications for someone in Mr. Erzinger’s profession,” said DA Mark Hurlbert, “and that entered into it.”

On July 3rd, liver transplant surgeon Steven Milo was riding his bicycle along Highway 6 when he was struck from behind by Erzinger, who then hit a culvert and kept driving. Erzinger continued into the town of Avon, drove through a few roundabouts and stopped at Pizza Hut, where he dialed Mercedes Assistance to report damage to his car. Police arrived to find him putting a bumper and broken-off side mirror in the trunk.

Meanwhile, not at Pizza Hut, Dr. Milo’s brain was bleeding. He lay on the side of the road until another motorist, Steven Lay (total portfolio unknown) stopped to help him and called 911. Since then, Milo has been diagnosed with spinal injuries and faces multiple surgeries—which is totally ironic because he’s, you know, a surgeon. Granted, that’s less classic irony and more Alanis Morissette unequivocal-tragedy irony, but still. The point is that one liver transplant surgeon is a small price to pay for the wonderful wealth management services that Erzinger contributes to society.

Weirdly, no one is denying that it was Erzinger’s billion-dollar portfolio that saved him. While Milo’s ability to perform surgery has been “seriously jeopardized” by his being run over by the financier’s excellent car, the DA’s office is primarily concerned with the risk that Erzinger might become poor. “When you’re talking about restitution, you don’t want to take away his ability to pay,” Hurlbert told Vail Daily. “We have talked with Mr. Haddon*

and we had their objections, but ultimately it’s our call.” Business Insider concurred, opining that Erzinger “might be working for the rest of his life and giving much of his paycheck to the victim.” And all for the simple act of running over a man with his car and then driving really far away. It’s like Les Miserables.

Prosecutors have since claimed that the two misdemeanors Erzinger now faces will be more punitive than the earlier felony charge, but they continue to emphasize his earning potential in their decision. Tacit in this line of reasoning is that Erzinger is an extremely useful investment strategist, and that jeopardizing his billion-plus-dollar portfolio might jeopardize the economy of Colorado. Since we have put aside passionate notions of retributive justice to embrace this clear-eyed, good-of-the-many assessment, I would like to offer an analysis along similar lines.

Dr. Steven Milo is—maybe was—a liver transplant surgeon. He possesses a specific set of skills that takes six to eight years to instill in a person and, if applied correctly, can prevent hundreds of other people from dying. He was run over by an investment manager, who possesses another specific set of skills that takes two or three years to instill and, if applied correctly, can use market-based strategies to increase capital by 10% to 25% annually for people who already have a lot of it. His work produces no tangible products. Dr. Milo’s work produces not-dead grandpa. Do you see where I’m going with this?

I’m not saying that financial manager isn’t a noble profession, or even that it’s less noble than transplant surgeon. I’m not saying that Erzinger, in running down Milo while he was riding his bicycle, did anything worse than make a terrible mistake. I am saying that all he had to do to avoid felony charges was stop his car. Erzinger shouldn’t be pilloried because he is rich. But he shouldn’t be above the law, either. He and his clients already have a billion dollars. From the standpoint of a good society, maybe that’s enough advantage without throwing in the protection of the district attorney.