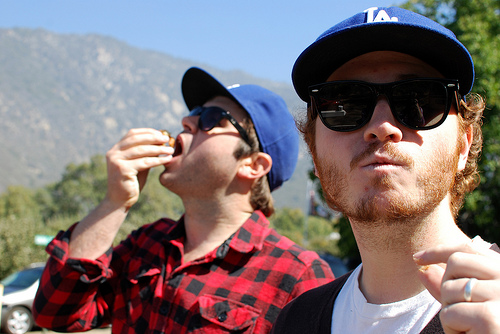 Smick sent me a link to this long essay ostensibly by a teacher at a predominantly black high school, supposed to have first appeared in the Rants & Raves section of Mobile, Alabama Craigslist. It appears all over the internet with that attribution, although the original has yet to be found. It reached Smick via a chain email, and he sent it to me with the possibly facetious question, “Is this racist?” Spoiler alert: yes, the essay is extremely racist. Besides repeatedly using the phrase “the blacks,” it also contains this paragraph:

One might object that there are important group differences among blacks that a white man simply cannot detect. I have done my best to find them, but so far as I can tell, they dress the same, talk the same, think the same. Certainly, they form rival groups, but the groups are not different in any discernible way. There simply are no groups of blacks that are as distinctly different from each other as white “nerds,” “hunters,” or “Goths,” for example.

Bob Parks described it as “the kind of truth that is often taken back out of PC fear.” He would have sourced it better, but his nephew was visiting him at his cabin.

Okay, it’s true that there are no black goths, but only because the makeup industry is also kind of racist. Otherwise, pretty much everything in this essay is suspect. Its fundamental project is racist. The ostensible author of this screed, “Mr. Jackson,” sets out to tell the truth about black people based on his teaching experience. There’s a name for the epistemological system that believes such truths can exist, and it’s racism.

You don’t get to make 128 broad statements about the members of a particular race and then claim that you’re not racist. Even if we were certain that Mr. Jackson was a pure-hearted observer with no bias for or against the two ethnicities of students that seem to attend his school, his plan to convey information about “what black people are like in large numbers” is an essentially racist proposition. It’s like proposing an experiment where you put a black guy and then a white guy alone in a room with a donut, and then saying it’s not racist because you plan to time each one with the same stopwatch.

So Mr. Jackson is racist. But is he real? The essay reads differently if it was written by an actual white guy who taught in Mobile for an unstated number of years, as opposed to by some grand wizard who works part time at the post office. And there is reason to believe that Mr. Jackson is not a teacher.

Certainly, he is not a good one. In his essay, Mr. Jackson reaches the same conclusion that all really good teachers reach early in their careers: some kids just don’t want to learn. He describes several characteristics of black students—they are loud, they interrupt one another during discussion, they refuse to do their homework—that are primarily signs of poor classroom management. He sums it all up with the clarion call of the bad teacher:

There is an unutterable secret among teachers: Almost all realize that blacks do not respond to traditional white instruction.

By “traditional white instruction,” he means boring, slipshod teaching. When a teacher tells you some kids don’t want to learn, you know you’ve met a bad teacher. What would you think of a mechanic who told you certain types of cars just can’t be fixed?

Fortunately, Mr. Jackson is probably not a teacher. For one thing, he lacks the teacher’s sense of what kids can and cannot do, as when he passes along the insane rumor that “blacks would turn the [Coke] machines upside down in the hope that money would fall out.” More tellingly, he claims to teach a “unit on British philosophers” that includes Bentham, Hobbes and Locke.

Earlier in the essay, Mr. Jackson complains that “liberals keep revamping the curriculum,” so he is presumably teaching what the state of Alabama tells him to, at least at the unit level. He also does not sound to be teaching AP History. He might get Locke if he were, but Hobbes and Bentham would be right out anyway. Either Mr. Jackson is teaching his own inappropriate curriculum to the knowledge-proof black kids in his class, or that thing about them rejecting 17th-century British philosophers because they’re white was too juicy a lie to resist.

And that’s the thing about this list of “truths” from a “teacher at a black high school”: it too neatly conforms to the white racist’s fantasy. Wouldn’t it be great if black kids didn’t want to learn—if they only came to school to sell drugs, if they got pregnant and didn’t care because they “have no sense of romance, of falling in love?”

That would make it okay to be a really shitty teacher. You wouldn’t have to feel bad about being an adult who dislikes particular children based on their race, or about voting for the guy who promises to lower your property taxes when you know the schools in your town are broke. You wouldn’t have to feel bad about helping to systematically guarantee that a bunch of kids in Mobile have worse lives because of what color their parents were. You could tell the “truth” about how awful black people are on Craigslist, because they wouldn’t even want a chance.