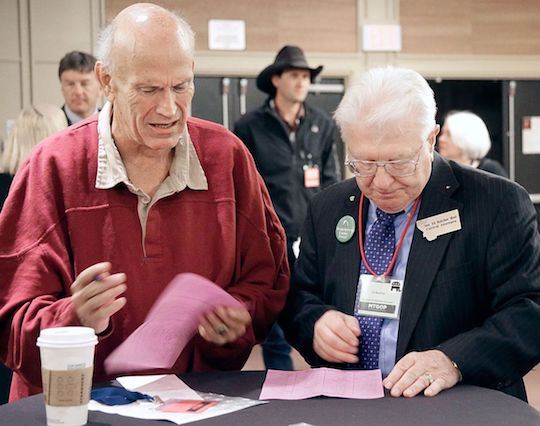 Readers of the Missoulian’s opinion pages know the paper has a strict policy of publishing only those opinions submitted in writing. Back in March, they published a letter to the editor from a woman who is not prejudiced, arguing that the Bible commands us to keep separate from Muslims. But that’s just an LTE, and the Missoulian’s stated policy is to publish all letters that “meet our guidelines.” Presumably they curate their guest columns a little more carefully, but you know what happens when we presume: our local newspaper publishes an editorial arguing that people without jobs should not be allowed to vote.

Ed Butcher is a former state senator and self-described historian/teacher of history, although his last teaching position—as a lecturer in American studies at Great Falls University—ended forty years ago. He appears to be retired, but don’t worry about him running afoul of his own proposal, because he owns a ranch. Like many retired landowners, he has a keen eye for who isn’t working. Quote:

Thousands of people are marching in highly organized mass protests across America. They obviously are not working for a living; so who is feeding, clothing and housing these radicals who are railing against the society supporting their “lifestyle?”

Butcher goes on to trace the decline of “the founding fathers’ republic” to the extension of the vote to men without property, a process that occurred during the 1820s. Now that’s conservative. His remedy is to require proof of employment to vote. You can read my full-throated defense of this idea in this week’s column for the Missoula Independent. Mister Butcher—Ed—if you’re reading this, reasonable people can disagree. But you are not a reasonable person, so I am forced to agree with you wholeheartedly.

It’s hard to read about anything other than fascism lately, but if you care to take a moment for something lighter, Snoop Dogg is coming to Missoula as part of the Puff Puff Pass Tour Part 2. Let’s all take a moment to wonder what the fudge that might look like, and whether our girlfriend made good on her threat to buy tickets. Once that’s done, check out my meditation on the uncharted path of the middle-aged rapper, also in this week’s Indy. If you had told me, when this song came out and I was a young dummy in Brooklyn, that I would write about Snoop Dogg for a Montana newspaper in 2016, I would have been confused. Once you told me Donald Trump would be president, though, I would have known exactly what kind of person I was talking to.

There’s Glenn Beck, explaining that progressivism is just revolutionary socialism, only with gradual change instead of sudden upheaval, effort within the existing system instead of violence, and consensus-building instead of dictatorial fiat. So it’s like, um, American democracy. Still, when you really think*

about it, progressivism is just radical communism by another name, the same way your uncle is just your aunt with testicles. We can forgive Glenn Beck for confusing an established political idea with its complement, or for decrying the abuses of progressivism even as he praises his local library, since he is speaking at the Conservative Political Action Conference, where up is down, black is white, white is also white, and conservatism—that age-old defender of institutions and tradition—has finally become the counterculture.