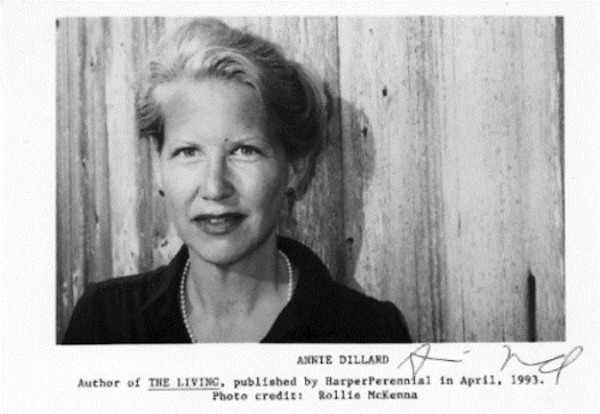 In my mind there is a class of prose stylists that includes E.B. White and George Orwell—monsters of sentence-level literature who attained their place not by astonishing but by economizing, authors whose lives’ work are scalpels rather than edifices. I like Faulkner and Hemingway, Carver and James. These are eminently recognizable stylists, but we recognize their style the way we recognize a person’s way of dancing. There is another class of author whose style we recognize the way we recognize a person’s gait. They are writers for whom the sentence is a means to an end, and they pursue their ends so diligently that their styles becomes unique not like the shape of an orchid, but like the shape of a fish. Their writing has evolved to move through the medium of consciousness, streamlined and precise. To me, Annie Dillard is the exemplar of this class.

I have read Pilgrim at Tinker Creek more times than I can remember. It is the only book-length work of nature writing I enjoy. People liken it to Walden by Henry David Thoreau—my Picador copy, which I got at a used bookstore in Bronte Beach outside Sydney, mentions Walden five words into the jacket blurb—which is weird, because I strongly dislike Walden. I admit there are similarities: Dillard and Thoreau both go live alone in semi-wild areas not far from human settlement. Both are essentially dilettantes; they experience the natural world first as a novel alternative to civilization. And both are concerned not just or even primarily with nature itself, but rather with the phenomenology of experiencing it. Like Walden, Pilgrim at Tinker Creek is about what living in nature does to the author’s consciousness, the changes it wreaks on her soul.

So why is Tinker Creek among the greatest works of the 20th century, even as Walden sucks a fat one? Dillard wrote her master’s thesis on Walden, and it’s safe to say it influenced her own book-length nature/isolation narrative. One difference between the two books, though, is that Dillard approaches nature critically. She is willing to consider the possibility that the natural world is not shot through with the essence of the divine, as Thoreau found it, but horrifyingly wasteful and cruel. After discussing a glob of tar found floating in the Atlantic covered in barnacles, Dillard considers the millions of barnacle larvae that drift through the ocean and find nothing on which to attach. Mature barnacles release up to four million larvae into the water at a time. “What kind of world is this, anyway?” Dillard writes. “Why not make fewer barnacle larvae and give them a decent chance? Are we dealing in life, or in death?”

A recurring theme of Pilgrim at Tinker Creek is the senselessness of a natural world we often imagine to be elegant and efficient. The book opens with Dillard’s revulsion at seeing a frog collapse as its innards are dissolved from below by a giant water bug. We spend a lot of time on parasites, including those wasp eggs that, if they are not deposited in a host soon enough, will hatch in their mother’s abdomen and devour her from the inside out. This is not the living temple Thoreau found. It is a charnel house. Dillard cannily notes, though, that humans are the only ones who seem to have a problem with that. If barnacle larvae experience their high mortality rates as unjust, we don’t know about it. Fairness and efficiency are ideas humans bring to the world. Nature’s failure to be decent might more clearly be seen as our failure to reconcile ourselves to it.

This Sisyphean inquiry—in the sense that it resembles the question asked by Camus, not necessarily in the sense that it is doomed—is what makes Tinker Creek enthrall me where Walden does not. Thoreau goes to the woods and says “wow” for 200 pages. Dillard is out there looking unflinchingly at her own revulsion. Her response seems more true to me, not because I believe nature is fundamentally gross or evil, but because of that prose style. It is so precise and streamlined that it feels honest the way a protractor is honest, the way the Harvard-educated heir to a pencil factory might not be.

That’s a petty swipe at Thoreau, and I retract it as much as I can without deleting it. But I believe there is a morality to craft. It radiates from Dillard’s prose, which is at once plain and rare, like a piece of jade. She never uses two words where one will do, yet when necessary she breaks out “susurrus” or “viscid.” The whole body of the English language seems available to her, even as she cooks mostly with the prime cuts. Her prose reads easily in a way that conveys the tens of thousands of hours she has practiced to make it that way. As I get older, and the flaws in my own style become more evident to me, I find myself loving this kind of prose more than high modernism or the conspicuous minimalism of the last four decades. Dillard has become such a strong writer as to transcend her own style, so that her sentences become something close to their own objects. She is among the best to ever do it, in my opinion, and to say Pilgrim at Tinker Creek is a book about nature is akin to saying that a glimpse of a woman striding purposefully down the street is about the store.

50 Books in 2018 is a recurring feature. Next, we’re reading Earth Angel by Denis Johnson. Update: No, we’re not. We’re saving Earth Angel for real-life book club and reading Huckleberry Finn. It’s my favorite American novel. Come with me on this one.