Montana is making news faster than I can have opinions about it. No sooner do I write a fun Indy column praising Judge Charles Lovell for striking down our campaign finance laws than he strikes them up again. It was satirical while it lasted. Probably, mooting one column is worth it to restore some limit on what political parties can give to candidates’ campaigns, as Lovell did today. With a heavy heart, I suspend my campaign for comptroller or whatever. I will still accept unlimited donations from political parties, but they’ll have to be in cash. 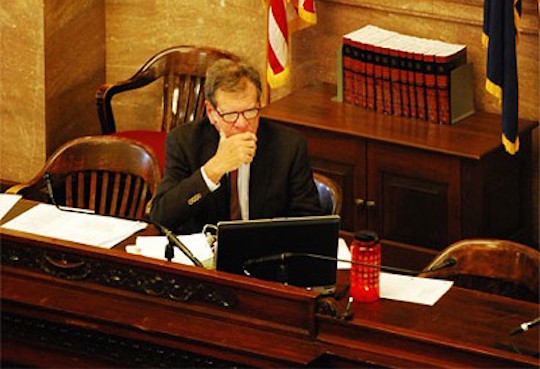 Montana has had 11 commissioners of political practices since 1975, which is odd, because they’re supposed to serve for six years. No commissioner has completed a term since 2004. The position is appointed by the governor of Montana but approved by the senate, and those two seats of power have been occupied by different parties for the last decade. The status of his office as a political football only makes it more impressive that, earlier this month, Motl became the first commissioner of political practices in two decades to clear the complaint docket.

The last time that happened was 1998. The commission has issued 286 decisions since then—144 of them since Motl took office in 2013. That he has done more in the last two years than his predecessors did in 16 undercuts the claim that he is selectively enforcing the law against conservatives. His clear docket refutes it. It’s hard to argue he only pursues complaints against his enemies when he’s answered every single one.

But that’s what Art Wittich (R-Belgrade) insists. Since Motl filed a lawsuit alleging he failed to report in-kind donations and illegally coordinated with conservative nonprofits during his 2010 campaign, Wittich has claimed to be the victim of a political smear. In January, he got a boost from an unsigned editorial in the Wall Street Journal, which misreported the governor’s first name and failed to observe that Western Tradition Partnership, the group with which Wittich stands accused of coordinating in 2010, and American Tradition Partnership—the group his law firm represented in a campaign-finance lawsuit that year—are the same entity. So B-minus fact-checking, Wall Street Journal.

That’s Pulitzer journalism compared to the piece Will Swaim wrote for Reason last weekend, though. Headlined Montana Commission on Political Practices Targets Ideological Opponents, It is the only piece Swaim has contributed to that publication. He’s an editor at Watchdog.org, a project of the Franklin Center for Government and Public Integrity. In 2011, the Franklin Center received 95% of its funding from Donors Trust and Donors Capital Fund, two linked 501(c)3 organizations that offer their contributors anonymity and the guarantee their money won’t go to liberal causes.

Donors Trust has also funded the legal defense foundation of National Right to Work, one of the organizations with which the Wittich campaign is accused of coordinating. Swaim, a quote-unquote journalist who believes Commissioner Motl is a partisan hack, happens to be funded by the same organizations Motl is pursuing. This is why we need a commissioner of political practices. It’s also why I can’t wait for March, when Motl v. Wittich will finally get its weeks in court and absolve Rep. Wittich of all wrongdoing. You can read all about in this week’s column for the Missoula Independent. We’ll be back tomorrow with Friday links.