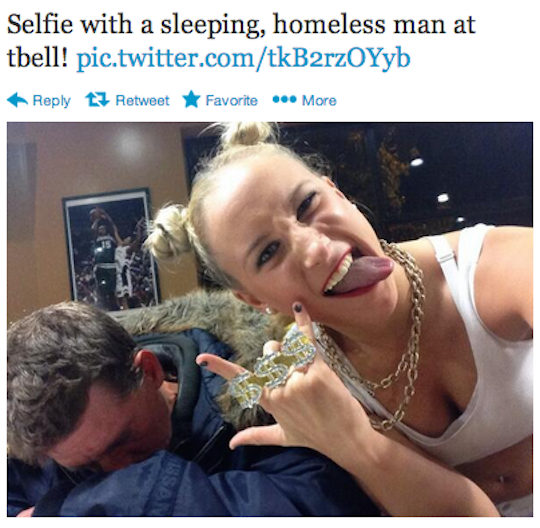 From the Tumblr “Selfies With Homeless People”

What an improbable collision of historical trends is this selfie with a homeless person. First, we have to invent camera phones and a culture that encourages us to point them at ourselves. Then, we need an economy strong enough to make personal camera phone ownership nearly universal, but also weak enough that many people have to sleep at Taco Bell. If you can synthesize all that in a lab setting, I’ll give you multi-finger dollar-sign rings. Today is Friday, and it’s so weird that it must be perfect. Won’t you pull up the ladder with me?

END_OF_DOCUMENT_TOKEN_TO_BE_REPLACED 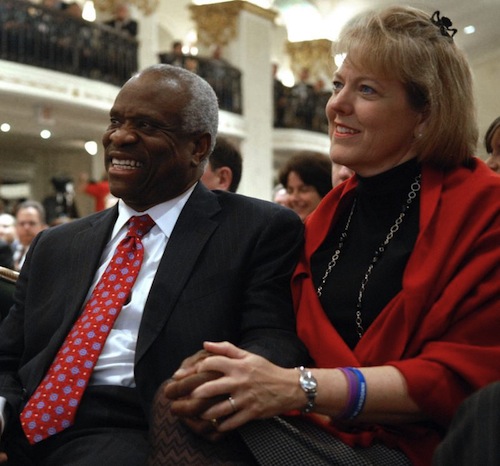 Combat! blog vacations in beautiful sunny well-groomed Los Angeles, California, today, and finds itself already adopting Californian work habits. While I blow dry my hair in my avocado linen jacket, how about you horrify yourself with the news that Virginia Thomas, wife of Supreme Court Justice Clarence Thomas, has started her own Tea Party chapter. This will surely allay my fears! “She is intrigued by Glenn Beck and listening carefully,” says her bio on Liberty Central, a name that no one will realize is ironic until midway through the 2012 corporate giving season election. In addition to holding the power to un-forgive a member of the Supreme Court for publicly acknowledging that he makes a lot pubic hair jokes, Virginia Thomas’s 501(c)4 can accept an unlimited quantity of corporate donations. “Because of a recent Supreme Court decision,” the LA Times observes drily, “the group may also spend corporate money freely to advocate for or against candidates for office.” Or it could, had it not already been busted for operating illegally. Faster than you can say “conflict of interest in sleeping on the hide-a-bed, Clarence,” Virginia consumer protection officials sent a letter of warning to Mrs. Thomas, informing her that Liberty Central was receiving donations while not properly registered as a charity. At least we know she’s not getting free legal advice. The citation is not uncommon—”Our policy is to assist them to come in compliance with the law,”* says state regulator Michael Wright—so Thomas’s group will either A) go the same way as that sweater she started knitting or B) funnel millions of corporate dollars to conservative political candidates while her husband adjudicates from the Supreme Court. Coin toss!