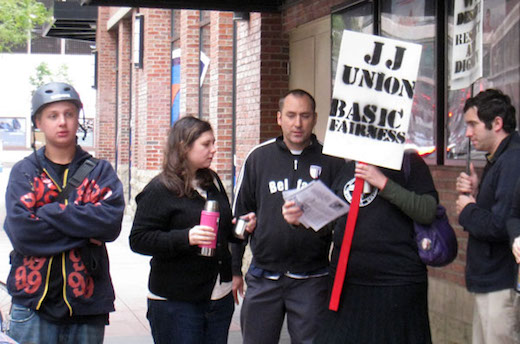 Minneapolis Jimmy John’s workers strike for the right to join a union in 2011.

Ask any person not directly employed in the arts or finance, and she will tell you that work sucks. It’s weird, because our parents and grandparents talked as if work were the best thing in the world, or at least a primary source of meaning in their lives. Then somewhere between Vietnam and Office Space, the indignity of the office became a standard motif in movies and television. That conceit seems almost quaint in a 21st-century employment landscape that features full-time “contract” work, wage theft, and stagnant pay. In a book called The Fissured Workplace, Boston University professor David Weil argues that work has become “debased” by management structures that separate employers from employees. Two other authors, Applebaum and Batt, see that as the inevitable outcome of three decades of leveraged buyouts.