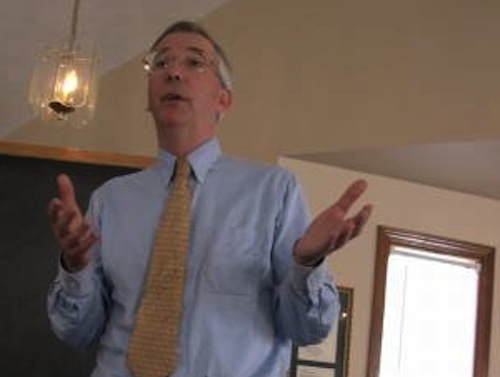 This blurry, oddly-tilted photo of Eugene Delgaudio taken from his website, www.objectivecorrelativesformyviewpoint.com

Back when we naively regarded the TSA’s invasive pat-downs as news that was actually happening to us, plenty of people advanced plenty of arguments against: they violated our civil rights, they were more show than security, a computer would see our wieners, et cetera. But only one person had the guts to say what we were all thinking: Loudoun County supervisor Eugene Delgaudio. By “we all,” I mean “we who are deeply conflicted, latent homosexuals,” and by “what,” I mean that the TSA pat-downs are part of the ever-creeping “homosexual agenda.” Seriously. Props to Fletch Dogg for the link. Delgaudio’s next-level crazy quote is after the jump.

In an email for the conservative organization Public Advocate for the United States,*

Delgaudio claims that the TSA’s non-discriminatory hiring policy amounts to “the federal employees’ version of the Gay Bill of Special Rights.” He is presumably alluding to an article stricken from later drafts of the Constitution, but whatever. Let’s get to the furtive, shame-inflected money shot. And I quote:

The next TSA official that gives you an ‘enhanced pat down’ could be a practicing homosexual secretly getting pleasure from your submission.

It was almost convincing until that last part, wasn’t it? Few of us regard getting frisked at the airport as an act of sexual submission, but that’s probably because we’re not psychologically girding ourselves against the frisson of pleasure we must not feel later when another man brushes past us in the aisle of the plane. Let’s unpack the assumptions that Delgaudio makes in constructing his scenario:

1) You and the TSA employee are of the same gender. You are both probably dudes, since lesbian TSA employees will not be a threat until security regulations require us to carefully describe our feelings before getting on the plane.

2) He is putting his hands all over you, and you have to hold absolutely still no matter how much you want to cry out or maybe moan a little. You can’t do anything about it. None of this is your fault.

3) The other guy is rock hard.

I don’t want to make unfair generalizations, but it’s hard to detect the homosexual overtones in airport security unless you are, um, constantly detecting homosexual overtones in everyday situations. This brings us to a theory that I like to call the Fowlkes Correlative, named after Ben Fowlkes because he invented it and also because he is a practicing homosexual. The Fowlkes Correlative holds*

that homosexuality seems more like a threat in American culture the more you regard it as a threat in your own life.

Take, for example, the argument that allowing gay marriage will somehow reduce the number of man-woman marriages. That makes no sense at all, unless you start from the assumption that the only thing keeping the vast majority of men from marrying other men is that it’s not legal. Sure, the reasoning goes, we all want to grasp the taut buttocks of nearly every dentist and UPS guy that crosses our path, drawing him closer as his tongue probes our neck and ear, which is why society has to keep that stuff in check. Because otherwise none of us could go home for Christmas.

The irony is too cheap to mention—although clearly not too cheap to exploit again and again for shock humor—but it’s a handy analytical tool. How many anti-gay policy positions are predicated on the assumption that homosexuality is the default human condition, restrained only by law and social more? The arguments against the repeal of Don’t Ask Don’t Tell, gay teachers, gay adoption, equal hiring opportunities—all of them presume that the more we let people be in gay in peace, the more people will choose to do it.

Of course, being gay is not a choice. It only feels that way to people who are gay and have desperately chosen to be straight again and again, almost every time. All of this is pretty funny from the standpoint of the straight person not afraid of security guards turning him gay. It’s probably even funny to the virulently homophobic closeted gay person, since he at least gets to tell and hear a lot of gay-dude jokes that the rest of us have respectfully abandoned. The only person it’s not funny to is the actual, practicing homosexual—the ten-or-so percent of the population that has to contend not only with inherited prejudices, but also with the other gay guys who can’t stop talking about how not gay we all need to be.