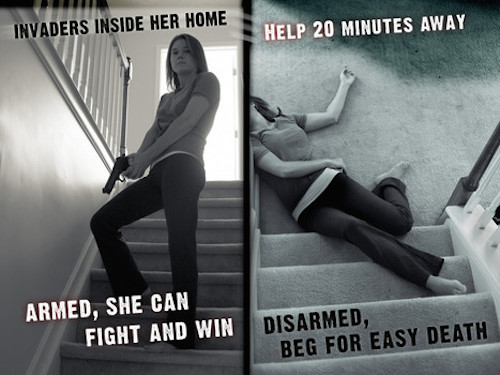 It doesn’t protect them from satire, though. My friend and infinitely patient arts editor Erika Fredrickson wrote this Castle Doctrine update to beloved young-adult stories, descriptively titled “Everybody Dies.” Here’s a taste:

Climbing over the fence, Nancy looked up to see a loaded gun in her face. The force of the blast threw her to the ground and one Mary Jane shoe tumbled across the field and into a rabbit hole.

It’s only a matter of time before the Hardy Boys crawl into the wrong basement, too. I presume that people will complain about this funny, trenchant piece on the grounds that A) it makes light of a tragedy or B) it is their fantasy to shoot someone who breaks into their home. I submit that the people covered by (B) deserve no sympathy, and we should make fun of them as much as possible.

According to a statement released by his lawyer, Kaarma “felt his family was being targeted by burglars who had become more sophisticated and bolder with every new invasion.” Then he left his garage door open with his wife’s purse inside and shot a high school student.

It’s possible that Kaarma is simply lying. If we take him at his word, though, this armed man convinced himself that garage-hopping teenagers were sophisticated burglars who personally targeted him. He is dumb and/or narcissistic—the kind of person who would bait his garage and wait up nights with a gun in the hopes of killing a burglar, then realize that killing someone was the worst mistake he ever made.

So welcome to phase two, asshole. The Castle Doctrine has rightly become an object of national scrutiny and local ridicule, maybe because it put a young man in a coffin forever instead of in jail for the weekend. There’s a reason why, historically, we have not let guys like Kaarma enforce the law, even in their own homes. His actions put him in the small but vociferous group of people who would rather punish crime than prevent it.

Those people are stupid, and the Castle Doctrine protects them. On first blush, it is completely reasonable and proper: it absolves people whose homes are entered illegally of the “duty to retreat,” meaning that they can attack intruders even if it would be easy to get away from them. From a moral standpoint, that makes sense. But from a pragmatic standpoint, it is idiotic.

If a scary burglar comes into your house, run away from the burglar. Lock yourself in a room with a window and point your gun at the door, if you must. If they are unarmed, you probably won’t need to shoot them. And if they are armed, don’t get into a gun battle inside your house. The duty to retreat is a legal obligation, but it is also a tactical one. A sensible person would rather lose property than risk his life and/or kill someone.

Kaarma, on the other hand, risked his property in order to kill someone. The problem with the Castle Doctrine is that it selects for insensible people, and even encourages them to violence.

We’ve all heard some permanent adolescent say he wishes someone would break into his home, because he’d blow them away. These people are assholes. They are not useful to a decent society, at least insofar as they might determine the lives and deaths of others. The Castle Doctrine invests them with that authority. In theory it’s for people who want to live in peace, but in practice it’s for people who want to live at war.