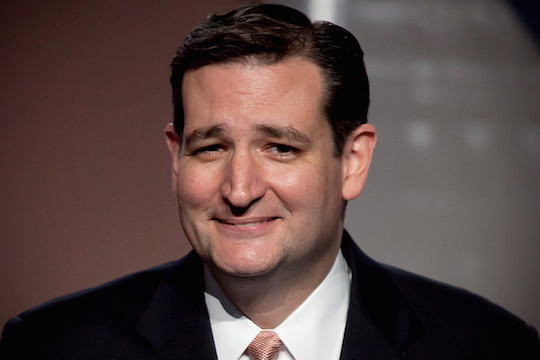 You may remember Ted Cruz from two Septembers ago, when he spent 21 hours filibustering a funding bill to prevent government shutdown1 and then voted for it two hours later. For those of us who find his behavior unbecoming, that’s Cruz in a nutshell: willing to say anything so long as it does not correspond to concrete action.

The government did shut down for two weeks in 2013, partly as a result of Cruz’s agitation. I got a funny column out of it, but I’m going to say that overall it was a net minus. It’s also pretty much his signature achievement in the Senate. Cruz’s most successful bill was arguably SB 2195, which denied a visa to Iran’s ambassador to the UN and a participant in the 1979 hostage crisis, Hamid Aboutalebi. He introduced a bill prohibiting the use of drones to kill US citizens within the United States, which neatly married legal redundancy to ethical circumscription.  Otherwise, Cruz’s major legislative project has been to eliminate all limits on direct contributions to political candidates.

Cruz renewed that call on Sunday, opining that “money absolutely can be speech from day one.” It’s a fundamentally elitist position, since existing limits on individual contributions to candidates approach what most people can afford. But Cruz is a populist of the worst kind, and he phrased his argument as though unlimited election spending would benefit the little guy:

It’s worth noting that all the examples Cruz cites are permitted under existing law. Individuals and certain corporations, for example, can already spend as much money as they want on radio and TV ads, so long as those ads do not explicitly instruct people to vote for a specific candidate. Cruz is not pushing to lift limits on how much money you can spend to make your views publicly known—to speak, in other words. He wants to lift the limit on giving money directly to a political candidate—to “speak” by writing a check to a campaign.

It’s a false equivalence between speech and donation, a misleading description of his own policy—pretty much any kind of mendacity you can think of. Most importantly, it is predicated on the assumption that his audience does not understand the policy they are being asked to support. That’s Cruz’s signature move. The smartest guy in the room has selected as his constituency people who are dumber than he is.

Telling a three-year-old that the world is on fire but mommy is going to fix it is an oddly perfect encapsulation of his career. The senator from Texas is a master of creating crises—either rhetorically, as he did in New Hampshire, or actually, as he did in September 2013—and then presenting himself as the solution. It’s a strategy that depends on people not comparing what he does to what he says, not understanding the real policies he pursues, or being so committed to absolute conservatism that nothing else matters.

That’s Cruz’s constituency: a coalition of reactionary conservatives, aging doomsayers, and people who feel strongly about politics but don’t follow it closely. If he is as smart as people say, he is morally obligated not to pander to such people. An intelligent leader should help his supporters act smarter, not stoke their ignorance. The phrase “leading from behind” may apply to this situation more than Cruz would like to admit.