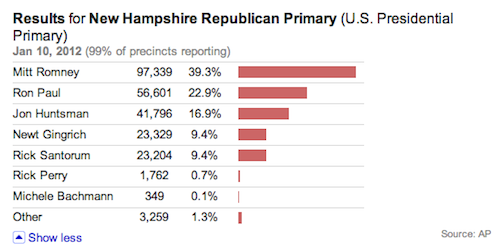 The most interesting picture of Mitt Romney I could find

I don’t know what happened, but Rick Santorum has somehow lost the New Hampshire primary. Given his landslide tie for victory in Iowa, I am forced to conclude that some sort of irregularity or even a natural disaster prevented people in New Hampshire from voting. Perhaps it relates to these reports I’ve been getting out of New England. It seems people out there have been succumbing to a kind of mass hysteria—Romneymania, they call it—in which registered Republicans suffer a Romnomaniacal episode and, you know, give up.

Don’t worry: campaign journalists have been taking their pills. The psychic preservation impulse that orders them to think about someone other than Mitt Romney remains intact, as this combination of headline and photo*

indicates. Also, and fortunately for all of us, Newt Gingrich will win the South Carolina primary as long as he does not kiss a black lady on the lips between now and next Saturday. That will give us something to talk about for a few weeks. Then, like a drunk in a motel who remembers it’s his kid’s birthday, our thoughts will turn to Mitt Romney.

No—think of the beach. Official Combat! blog candidate and person who has not promised to fundamentally alter the federal government Jon Huntsman came in third to Ron Paul, who has yet to be struck by a baseball and explode in a cloud of dust and spiders. Rick Perry got less than one percent, and 350 Michele Bachmann supporters were not aware that she had ended her campaign. That’s why you don’t argue with your brother-in-law. It’s also why you don’t try to run a campaign with no donors and new staff every month. To win the Republican nomination, you need a strong organization and a deep war chest like Mitt—damn.

Besides the part where you have either a million dollars or a sweet mustache, here is why it sucks to be a Republican right now:

First of all, Ron Paul has been using that economics textbook thing since college. Second of all, you can forgive Newt Gingrich for saying basketball championship. He meant to say human basketball championship. Rick Perry said he would be shooting a gun—or repealing a regulation, whatever, just not aborting a fetus—and everybody else said football. “I love football,” Romney said, “so I gotta choose football.” It’s a little rhetorical flourish I call The Human Touch.

So, you are a billionaire casino magnate or an Arizona contractor who listens to the radio, and you have to choose one of these people. How do you feel? You obviously shouldn’t pick one of the crazy answers. You are therefore left with the guy who also said football. Two concerns leap to mind here. First, let us agree that one principle of winning debates is do not give the same answer as your opponent. Second, how do you get excited for something like that?

Mitt Romney is the Republicans’ guy for President in 2012 the same way that Thriller is the most popular album of all time. Go on: swear to me in the Comments section that Thriller is your favorite album, using your real name. It’s impossible. No one can say it and feel good about it, especially when they forget that “Billie Jean” is on there. But then you see that the second most popular album of all time is The Dark Side of the Moon, an album that proves certain people don’t experience interiority. And you’re like okay, maybe this polished and snappy though heavily marketed product is my favorite, and boom: you’re back to Mitt Romney.

I hate thinking about him, too. I wish one of these crazy guys would win so that the general election could be some draconian spectacle. Can you imagine a presidential debate between Barack Obama and Ron Paul? It would be like a man scolding a cat. But nothing that fun is going to happen. Mitt Romney is going to meet Barack Obama in debates ranging from civilized to testy, and then we’re all going to vote on which one we like better.

That’s the thing about Thriller. You say there’s no way that can be the best album, but then you have to say which one is better. Does Exile On Main Street contain songs of equivalent value to “Wanna Be Startin’ Somethin’,” “Billie Jean” and “Beat It?” Or are you really asking yourself the question which is better: Thriller or every other album? Because that, my friend, is a species of illusion.