TV journalists Alison Parker and Adam Ward, who were shot this morning

A former employee of a Virginia CBS affiliate killed reporter Alison Parker and cameraman Adam Ward this morning, shooting the two journalists and their interview subject at close range before turning the handgun on himself. Bedford’s WDBJ described the shooter, Bryce Williams, as a disgruntled former employee. If only Ward and Parker had been armed, they might have seen Williams preparing to shoot them and shot him with their superior training and reflexes. Or—and I know this sounds crazy—maybe we could stop selling devices that give every adult in America the power to kill somebody else.

More guns mean more shooting deaths. That’s a controversial claim, which is odd, since very few things other than guns shoot people. But, the reasoning goes, guns also provide a deterrent to shooting people. The only thing that stops a bad guy with a gun is a good guy with a gun, except when good guys without guns do it. Or when no one can stop the bad guy, and he kills several people in rapid succession, because he has a gun.

But that stupid saying—which imagines that insane people with guns are a natural feature, like humidity, and our only choice is between shooting at them and submitting to death—has become an insurmountable argument against gun control. When guns are outlawed, only outlaws will have guns. Guns don’t kill people; people kill people. Don’t you want to be able to kill them back?

It’s true that guns don’t just go off by themselves.1 But from the standpoint of broad statistical trends in a society, more guns strongly correlates with more people getting shot and killed. Using statistics on gun ownership and firearm deaths per capita in the US and other countries, Joshua Tewksbury has made these useful graphs. 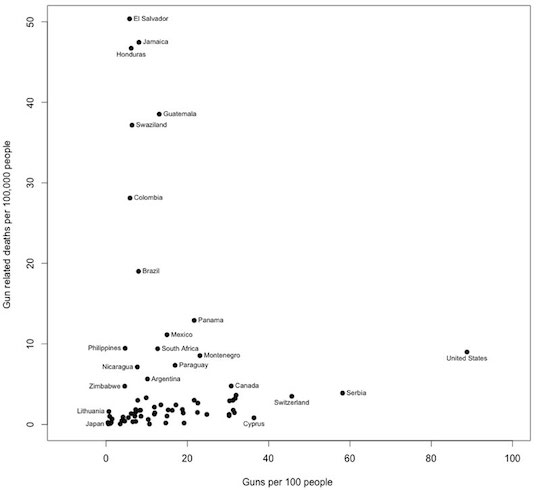 The first shows gun-related deaths per 100,000 people as a function of guns per 100 people. In addition to reminding us that the United States contains a lot of guns, it also suggests that we’re doing a better job of not killing people with them than other countries. But look at the nations with higher death-to-guns ratios: El Salvador, Swaziland, Guatemala, Honduras, Colombia, Jamaica. They’re all significantly less developed than the US, and five of the six have had active civil wars in the last 20 years. It seems likely their guns kill more people than ours do because most of their guns belong to paramilitary organizations. 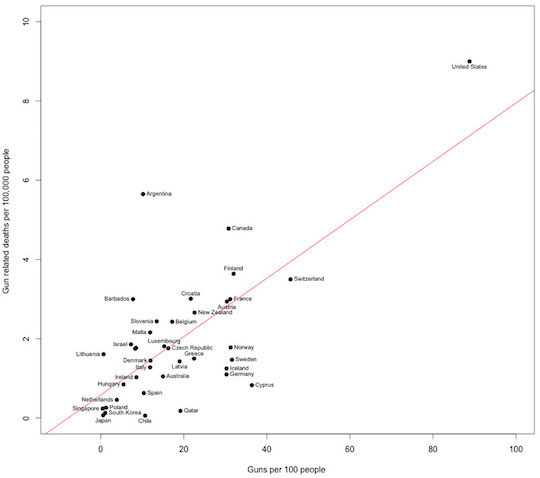 Two things are striking here. First, these data points cluster around the line that indicates a 1:1 correlation between guns and shooting deaths. Second, the United States is a major outlier on both axes. We own a lot more guns, and we kill a lot more people with them. Only Argentina seems to be using its guns more recklessly, and they have about one tenth as many as we do.

The call for more guns so good guys can stop bad guys is, in essence, the insistence that every American reserve the right to kill someone else. Sure, you can’t shoot someone unprovoked without being charged with murder. But as this morning’s tragedy reminds us, using guns to control guns favors the person who shoots first.

Bryce Williams owned a machine that kills people when you point it at them and press a button. All he had to do to kill two of his former coworkers was point it at them. All he had to do to escape the consequences of his actions was to point it at himself. Sure, he paid the ultimate price for murdering two people. But from a societal standpoint, does that make anything better? Do we consider what happened this morning justice, because the killer went on to kill himself?

Parker and Ward are dead because Williams got fired. Losing his job somehow caused him to stop valuing human life—the lives of others and his own. It’s nuts that an event that insignificant so completely warped his value system. But it’s also nuts that almost any American, whose values are subject to whatever forces, can buy a gun and get at least one free murder before anybody stops him.

Yes, you can kill somebody with just about anything. But nothing makes it easier to kill somebody than a gun. Yes, you can use a gun to prevent deaths. But the country with more guns than anywhere else in the world also kills more people with guns than anywhere else in the world. That’s our country. We’re killing one another with guns. If that’s our choice, we should stop lying about it. When we talk about guns, we should stop pretending to be a nation of heroes and acknowledge that we are a nation of killers.