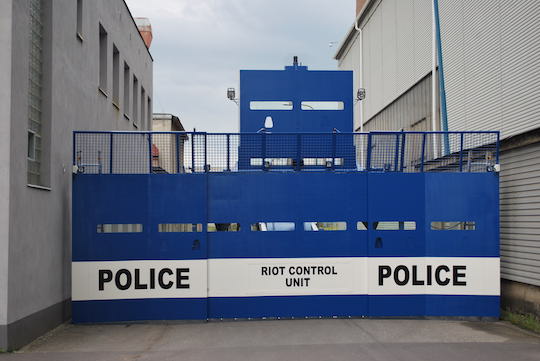 Here’s a promotional video showing the Bozena Riot in action:

I don’t know about you, but when that shield came up and a crowd of black-clad cops and dogs charged the camera, I felt a rush of safety. Because I staunchly believe that all lives matter—especially the lives of police—I want them to be fully protected from lawbreakers. Body armor and masks that not only shield their faces but hide them from view are good. A moving wall that makes resistance impossible is good. I feel the same way about the car wash-style tear gas dispensers mounted on the front of it.

Tear gas was outlawed as an instrument of war under the Chemical Weapons Convention of 1993, by the way. But a number of countries, including the United States, held out for an exemption for domestic riot control. This isn’t necessarily bad. If international law forbade the use of gas to control riots, police might use bullets instead. But there is something unsettling about the idea that an agent deemed unethical for use on soldiers is a staple of municipal law enforcement today.

But rioters deserve what they get, right? By definition, they are breaking the law in a way that endangers innocent people. As a mass bent on general chaos, a riot threatens the stability of society itself. Peaceful protest is one thing, but destroying property or attacking police crosses a bright line. This perspective probably lies behind the chirpy tone of this story on the Bozena Riot in the International Business Times. Quote:

A formidable remote-controlled anti-riot vehicle called the Bozena Riot has been designed to make light work of angry mobs with a giant expanding shield and packing an arsenal of crowd dispersal tools. Built by Slovakian company Bozena, the high-tech security system keeps law enforcement units safe with its shock-absorbing barrier, which can be expanded out to 7.5 metres to protect 36 officers and features a rising platform to give riot police an elevated view of their surroundings and provide tactical advantage against aggressors.

This is approximately how tech reporters write about new laptops. There’s the thrill of power in “formidable” and “make light work of angry mobs,” along with the disingenuous assumption that the main purpose of this vehicle is to “keep law enforcement units safe” by giving cops an insurmountable advantage “against aggressors.” But who are the aggressors when the Bozena Riot rolls out?

Not every public disturbance that police use force to stop is a riot. The Dakota Access Pipeline protests were peaceful, if not lawful, and cops used bulldozers and tear gas cannons—along with a lot of good old-fashioned clubbing—to disperse them anyway. The demonstrators who got pepper-sprayed and arrested weren’t aggressors against the police. And even when a full-blown riot erupts, its purpose is generally not to seek out and harm the police. To justify the use of military-grade force on civilians in the name of officer safety is to ignore the fact that civil unrest is almost never directed at the cops until they show up to stop it. It’s directed at the state.

But the state has a monopoly on violence. That’s the whole premise of modern government: we give up our natural right to murder the guy who punched our sister or blow up the mine that dumped tailings in the lake, so that the government will do our justice for us. This deal means that when we undertake violence ourselves, the state can use it on us. But the arrangement has become less equitable over the last few decades, because the state keeps defining violence down.

If I punch a cop, I should get pepper sprayed. But what if I’m just blocking the street and waving a sign that demands the federal government cancel Girls? This behavior is disruptive, but it is not violent. Neither is camping out near a watershed so a private company can’t build a pipeline there. Yet the state keeps escalating the force it can use to stop violence, even as what it stops gets less and less directly violent.

There seem to be so many situations in which “peace maintenance is required” but nobody is getting hurt. Smashing windows and throwing rocks at the cops is violence, but now so is blocking traffic or picketing a business. It’s not difficult to imagine a scenario in which any public expression of dissent is reclassified as violence. In that moment, the Bozena Riot will protect police just as thoroughly as it did when we bought it to stop soccer hooligans. Will we be glad it does?