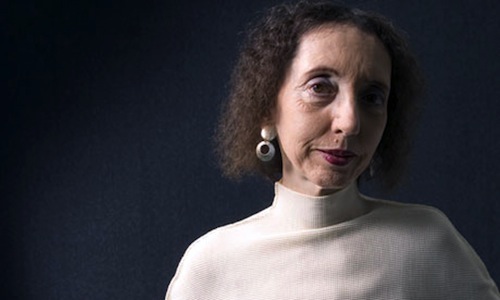 Before we continue, I should acknowledge that JCO is A) a much better writer than me and B) very old. She is 74, which in Twitter years makes her 518. Like many older people, she recognizes the potential of Twitter and uses it in interesting ways, but she is deaf to the appropriate degree of informality. Compare this tweet from a typical Twitter user:

…to this tweet from the woman who wrote “Where Are You Going, Where Have You Been?“:

That is what the kids call heavy. It is no coincidence that the Twitter logo is a bird. The site is designed to be light; short messages flicker across our view, not to be seen again. The collision between this superficial form and serious content is what makes accounts like Kim Kierkegaardashian funny. I would not go so far as to say that J-Coates is funny when she addresses popular culture, but she generates a similar bathos:

To which I reply: yes and no. The idea of Joyce Carol Oates seeing Game of Thrones for the first time, not liking it, but then reminding herself that she didn’t like Henry James at first either is strangely poignant. Here is a woman whose intelligence and sophistication is far beyond that of the average American. Probably, she experiences more than the rest of us, the way a dolphin experiences more than a clam. She is also likely to live in a somewhat rarefied environment; she has been teaching creative writing at Princeton since the mid 1970s, and her professional life is limited to those people who read and take an interest in literary fiction.

It is therefore probable that her assessment of what the average person is like dramatically overestimates our taste and intelligence. Encountering a popular but trashy HBO show, she reasons that it will reveal its nuanced sensitivity gradually—like that other popular favorite, Henry James. It is an innocent mistake and a heartbreaking one—one that evokes the mountainous loneliness of exceptionality. J-Coates’s Twitter feed is a document of the massive discrepancy between what it is like to be @JoyceCarolOates and what it is like to be, say, @Newyorkjets561.

I think that’s why it’s so pleasing. It is an amplified version of our own experience with Twitter, which is to read the opinions of a vast swath of ordinary people and learn that they are much, much dumber than we previously assumed. The internet is a wonderful tool for misanthropes, because it allows us to vent our crank opinions to people we might not otherwise have the temerity to harangue. It is a devil’s bargain, though, because it also shows us the millions of other people from which our organic life spares us. If you are Joyce Carol Oates, it is probably better to go on thinking that everyone is basically like you.